Polish President Andrzej Duda made a surprise compromise bid over controversial court reforms that aim to expand the justice minister's powers as thousands of protesters took to the streets over the proposed changes.

Poland's president sought on Tuesday to end a bitter political conflict surrounding changes that the ruling populist party is introducing into the nation's judicial system.

The parliament, dominated by the ruling Law and Justice party, was holding a heated debate over a draft law that would immediately dismiss the current judges of Poland's highest court, the Supreme Court, and put the justice minister in charge of it.

Facing criticism, the ruling party changed some provisions just before the debate to give a national judicial council power to appoint the court's judges.

The opposition says the proposed law violates the constitution and judicial independence. The head of the court, Malgorzata Gersdorf, said in parliament that Law and Justice has decided to "destroy the Supreme Court."

A huge crowd with candles and chanting "free courts, we want a veto" gathered before the Presidential Palace, urging President Andrzej Duda to reject the bill. Popular actors and figures addressed the crowd.

The influential Roman Catholic Church appealed to all political forces to seek an accord in the interest of the common good.

Poland's government is already under strong criticism from the European Union for steps it has taken to control the judiciary, which were among its first decisions after it took power in November 2015. The government's term is characterised by mass protests against its policies, which critics say threaten democracy and the rule of law.

But ruling party leader Jaroslaw Kaczynski, a lawyer and Poland's most powerful politician, says the judiciary still works along ineffective communist-era lines and needs radical change and new people to become efficient. He argues such are the expectations of the general public.

Amid opposition protests, the ruling party was pressing ahead with work on the new legislation to have it approved before it takes a vacation break in August. If voted in, it requires approval from the upper house and from Duda.

But Duda warned he won't sign the bill into law unless another controversial law, recently approved by the lawmakers and concerning appointments to a top legislative body, is amended according to his suggestions. The suggestions aim to shield a supreme judicial body, the National Council of the Judiciary, from the influence of the ruling party. The law gave a simple majority of lawmakers the right to appoint judges to the council. Duda wants it to be a three-fifths majority. 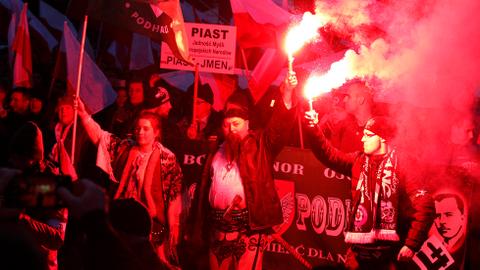 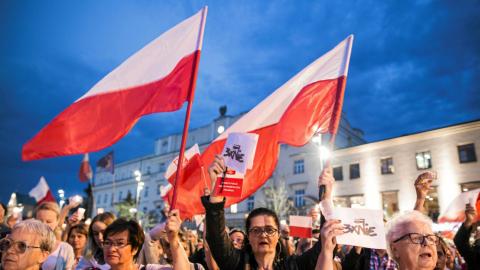