Pope warns against the devil, "unguarded tongues" in the media

In the third apostolic exhortation of his pontificate - a guideline on how Catholics can strive for "holiness" - the 81-year-old also unexpectedly hit out at his critics.

Pope Francis has put Satan in his place, citing the devil repeatedly in a document published on Monday following a Vatican rebuke last month of a journalist who quoted him as saying hell does not exist.

In the document known as an Apostolic Exhortation called "Gaudete et Exsultate," (Rejoice and Be Glad), the pope also bewails the amount of defamation and slander spread online by some Roman Catholic bloggers and Twitter users.

Satan gets more than a dozen mentions in the document as Francis talks about how life can be "a constant struggle against the devil, the prince of evil."

He continues in the same section: "Hence, we should not think of the devil as a myth, a representation, a symbol, a figure of speech or an idea. This mistake would lead us to let down our guard, to grow careless and end up more vulnerable."

On March 29, the Vatican felt compelled to reaffirm the existence of hell after Eugenio Scalfari, 93, an avowed atheist who has struck up an intellectual friendship with Francis, wrote that the pope had told him that "A Hell doesn't exist".

Scalfari prides himself on not taking notes and not using tape recorders, "reconstructing" encounters later in articles.

Ironically, Francis did mention hell in Monday's document - in a section that warned against "unguarded tongues" in the media.

In it, he referred to online hate in the Catholic media, which is predominately present on right-wing, conservative blogs and Twitter handles that often use strong language to criticise liberal Catholics and even the pope himself.

"Even in Catholic media, limits can be overstepped, defamation and slander can become commonplace, and all ethical standards and respect for the good name of others can be abandoned," Francis said.

"It is striking that at times, in claiming to uphold the other commandments, they completely ignore the eighth, which forbids bearing false witness or lying, and ruthlessly vilify others. Here we see how the unguarded tongue, set on fire by hell, sets all things ablaze," he said, paraphrasing a passage from the Bible.

The pope also issued a warning to Catholics who criticise his calls to welcome migrants with open arms.

"Some Catholics consider the situation of migrants to be a secondary issue," he wrote.

"That a politician looking for votes might say such a thing is understandable, but not a Christian for whom the only proper attitude is to stand in the shoes of those brothers and sisters of ours who risk their lives to offer a future to their children." 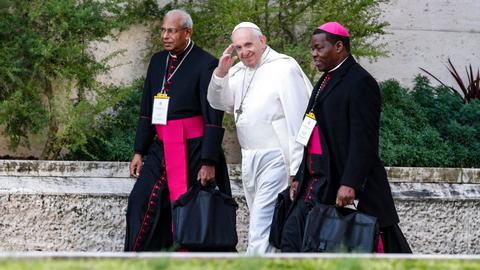