The funeral, which will be telecast live on television, will take place within Windsor Castle, but there will be no public processions due to the pandemic.

Britain's Prince Philip, Queen Elizabeth's husband who died on Friday aged 99, will have a ceremonial funeral on April 17 without any public access or public procession, Buckingham Palace said.

The funeral will take place at St George's Chapel at Windsor Castle at 1500 local time on April 17.

"It will be what's known as a ceremonial royal funeral," a Buckingham Palace spokesman said. "The plans for the funeral are very much in line with the Duke of Edinburgh's own personal wishes."

There will be no public access, no public processions and the funeral will take place entirely within the grounds of Windsor Castle.

The queen has approved the plans.

Philip currently lies at rest in the Private Chapel at Windsor Castle. There will be no lying in state. On April 17 the coffin will be moved from the State Entrance to St George's Chapel for a funeral service.

The service will begin with a national minute of silence. The congregation will adhere to national Covid guidelines.

At the end of the service Philip will be interred in the Royal Vault in St George's Chapel.

The funeral will be broadcast live. There will be a period of national mourning until the end of Saturday April 17. The royal family will observe two weeks of royal mourning.

"While this is naturally a time of sadness and mourning for the Royal Family and the many others who knew or admired The Duke of Edinburgh, it is hoped that the coming days will also be seen as an opportunity to celebrate a remarkable life," a Buckingham Palace spokesman said.

Philip was "remarkable both in terms of his vast contribution and lasting legacy."

Prince Harry plans to attend the funeral though his pregnant wife Meghan has been advised not to by her physician.

"The Duke of Sussex is planning to attend," the Buckingham Palace spokesman said. "The Duchess of Sussex has been advised by her physician not to travel."

The guest list for the funeral will be limited to 30 in line with government guidelines, meaning attendees will wear masks.

Prime Minister Boris Johnson will not attend the funeral to make space for as many family members as possible under pandemic rules, his Downing Street office said in a statement.

"As a result of the Coronavirus regulations, only 30 people can attend the funeral of HRH The Prince Philip, Duke of Edinburgh," the statement said.

"The prime minister has throughout wanted to act in accordance with what is best for the royal household, and so to allow for as many family members as possible will not be attending the funeral on Saturday."

READ MORE: How the world reacted to Prince Philip's death

Philip's coffin currently rests, covered with his personal standard and a wreath of flowers in the Private Chapel.

On the day of the funeral, the coffin, covered by his standard a wreath, his naval cap and sword and accompanied by the Dean of Windsor and the Lord Chamberlain, will be moved to the State Entrance of Windsor Castle by a bearer party from the Queen’s Company, 1st Battalion Grenadier Guards.

In the quadrangle at Windsor Castle, representative detachments drawn from Philip's special military relationships such as the Royal Navy, the Royal Marines, The Grenadier Guards, the Royal Gurkha Rifles, the Intelligence Corps and the Highlanders will line up.

The Foot Guards and the Household Cavalry will line up around the perimeter of the quadrangle.

The coffin will leave the State Entrance of Windsor Castle at 1445 local time in a specially modified Land Rover which Prince Philip helped to design.

The band of the Grenadier Guards, of which The Duke of Edinburgh was a colonel for 42 years, will lead the procession. The Land Rover will be flanked by pall bearers from the Royal Marines, Regiments, Corps and Air Stations.

The coffin will arrive at the foot of the West Steps of St George's Chapel at 1453 to a Guard of Honour and Band from The Rifles. Positioned in the Horseshoe Cloister will be the Commonwealth Defence Advisers from Canada, Australia, New Zealand and Trinidad and Tobago.

The West Steps of St George’s Chapel will be lined by a dismounted detachment of the Household Cavalry. A Royal Naval Piping Party will pipe the ‘Still’ once the Land Rover is stationery at the foot of the West Steps.

The coffin will pause for the national minute of silence at 1500 local time.

The Duke of Edinburgh's "insignia" - essentially the medals and decorations conferred on Philip, his Field Marshal's baton and Royal Air Force Wings, together with insignia from Denmark and Greece, will be positioned on cushions on the altar in St George's Chapel. 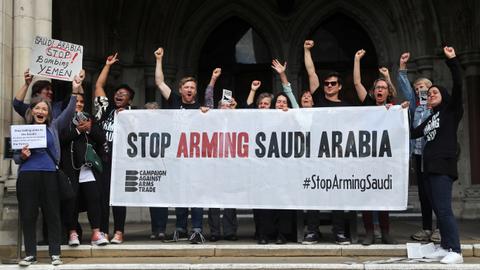