Russian military plane with 92 aboard crashes over Black Sea

The aircraft was found near the coast of the Sochi and was on its way to Latakia in Syria, the ministry said.

A Russian military plane Tu-154 crashed over the Black Sea on Sunday with 92 people on board, Russia's defence ministry said.

A rescue team has found fragments from the plane at a depth of 50-70 metres at a distance of around 1.5 kilometres (0.93 miles) from the Russian coast.

The plane disappeared from radar only 20 minutes after it took-off from the Black Sea resort of Sochi at 5:40 am local time (0240 GMT).

It was on its way to the Khmeimim air base in Syrian province of Latakia, where Russia launches air strikes against Syrian rebels.

President Vladimir Putin has ordered a government probe into the incident.

"Russian President Vladimir Putin has ordered Prime Minister Dmitry Medvedev to form and head a state commission to investigative the crash of the Tu-154 plane in Sochi," the Kremlin said, adding that Putin expressed his deepest condolences to the families and friends of the victims of the crash.

Kremlin spokesman Dmitry Peskov said that it was too early to say what had caused the crash. However, according to Russia's RIA news agency, an unidentified security source said the preliminary data indicated that the plane had crashed because of a technical malfunction or a pilot error.

Turkish Defense Minister Fikri Isik sent a message of condolence to his Russian counterpart, Sergey Shoygu as to the plane crash. "

''I have learned with great sorrow that the Russian Defense Ministry's Tu-154 military transport aircraft departing Russian city of Sochi crashed in Black Sea, leaving the passengers and the crew aboard dead,'' Isik said in a statement.

Last Monday, another Russian military plane crashed in Siberia with 39 people on board. Nobody was killed in that accident. 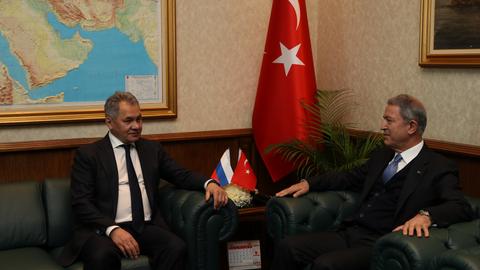