Scottish lawmakers back bid for referendum on leaving the UK

The Scottish parliament voted 69-59 to back First Minister Nicola Sturgeon's call to ask the British government for an independence vote within the next two years. This vote could see Scotland eventually exit the United Kingdom

Scottish parliament voted on Tuesday to back First Minister Nicola Sturgeon's bid to hold a new independence referendum in late 2018 or 2019, once the terms of the UK's exit from the European Union have become clearer.

The Edinburgh assembly's vote, which was widely expected, gives Sturgeon a mandate to seek permission from the British parliament in London to press forward with preparations for a referendum seeking independence from the UK.

Following the assembly's vote on the referendum decision, the British government said it would not be entering into negotiations on the Scottish government's proposal to hold a new independence referendum.

Scottish voters rejected independence from the UK in a 2014 referendum that Sturgeon's Scottish National Party (SNP) called a once-in-a-generation vote. But Sturgeon says Brexit has changed the situation dramatically because the UK as a whole voted to leave the European Union, while Scotland voted strongly to remain in the bloc.

"Scotland's future should be in Scotland's hands," Sturgeon told lawmakers in the Edinburgh-based parliament.

Sturgeon said that whatever the final terms, Brexit would mean a "significant and profound" change for Scotland. "That change should not be imposed upon us," she said. "We should have the right to decide the nature of that change."

The motion, put forward by Sturgeon, passed by 69 votes in favour and 59 votes against in the Scottish parliament. The Scottish Green party threw its weight behind the SNP in Tuesday's vote. 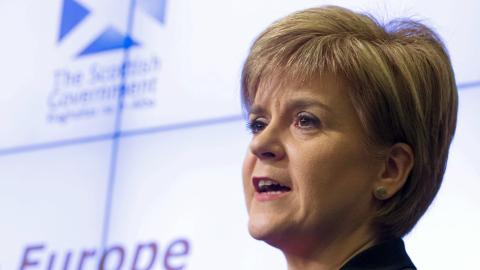