At least 74 people have been injured and taken to hospitals from the fire. It is not known how many people remain trapped in the building.

Six people have been confirmed dead in a huge fire at a London tower block and the death toll is expected to rise, police said on Wednesday.

Fire engulfed the 24-storey block of flats in central London in the early hours of Wednesday. More than 70 people were injured and some residents were trapped inside the burning tower.

"We can confirm six fatalities at this time following the fire in North Kensington," London's Metropolitan Police said in a statement. "These are very early stages and we do expect that figure to rise."

At least 74 people are being treated in hospital with 20 of them requiring critical care, London Ambulance Service said.

"We have treated and taken 64 patients to six hospitals across London, where 20 people are currently in critical care," London Ambulance Service's director of operations, Paul Woodrow, said in a statement.

The ambulance service said a further 10 patients had made their own way to hospital, taking the total being treated to 74.

The London Metropolitan police have set up an emergency number for people to get information about casualties.

It is not known how many people remain trapped in the building.

Massive flames licked up the sides of the block as 250 firefighters battled the blaze along with 40 fire engines. Plumes of black smoke billowed into the air.

The London Fire Brigade said the fire had engulfed all floors from the second to the top of the building on the Lancaster West Estate in West London.

This man managed to escape from the 17th floor with his 68-year-old aunt. He told me how he got out #LatimerRoad pic.twitter.com/d4miXigfN3

Residents related how they woke up to the smell of burning and rushed to escape through smoke-filled corridors.

Some British media were reporting that residents had been seen shouting for help from windows on upper floors as the fire spread.

"A number of people being treated for a range of injuries," police said. "Residents continue to be evacuated from the tower block fire."

The cause of the fire, which broke out just after 0000 GMT, is not known at this stage, the Fire Brigade said.

Fire crews will be tackling the fire for at least the next 24 hours, Cotton said.

"It has been a very large and very significant fire, I anticipate the London Fire Brigade will be on scene dealing with this fire for at least the next 24 hours," she said, adding that a number of firefighters had sustained minor injuries during the incident.

Khan said questions will need to be answered over the safety of tower blocks.

Some residents said they had been advised to stay in their flats in the event of a fire, while the block's residents association had previously warned it was worried about the risk of a serious fire.

"These questions are really important questions that need to be answered," Khan told BBC Radio.

"Across London we have many, many tower blocks and what we can't have is a situation where people's safety is put at risk because of bad advice being given or if it is the case, as has been alleged, of tower blocks not being properly serviced or maintained."

Police closed the A40, a major road leading out of west London, and a London Underground line passing the area near Latimer Road station was also shut down as a precaution.

The apartment block was built in 1974, but had recently undergone a major refurbishment, including a new heating and hot water system.

Local residents had warned a year ago about a potential fire risk caused by rubbish being allowed to accumulate during improvement works.

"This matter is of particular concern as there is only one entry and exit to Grenfell Tower during the Improvement Works," read a blog post by the Grenfell Action Group.

"The potential for a fire to break out in the communal area on the walkway does not bear thinking about as residents would be trapped in the building with no way out," it said. 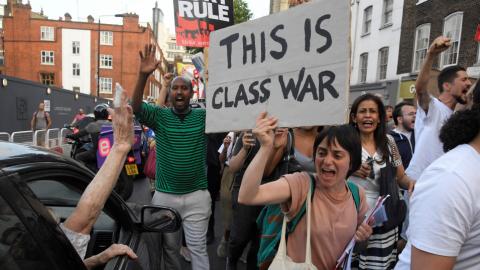