Novak Djokovic's fans and relatives took streets to show support to their tennis star following a row over a coronavirus vaccine medical exemption where the Serbian government issued a note to the Australian diplomatic mission.

The detention of world number one Novak Djokovic in Australia over his alleged failure to meet pandemic entry requirements has fuelled anger and charges of racism in his native Serbia.

Hundreds have rallied for the past two days in support of the tennis star, the president has evoked a "political witch hunt" and Serbia's religious leader has called for the nation to offer prayers for their favourite son.

The vaccine-sceptic tennis star was detained after arriving in Australia earlier this week for failing to "provide appropriate evidence" of double vaccination — the necessary medical exemption needed to enter the country.

Although Serbia got off to a strong start with Covid vaccinations, the drive has stalled.

"Thank you to people around the world for your continuous support. I can feel it and it is greatly appreciated," the 34-year-old Djokovic, who is in a detention facility in Melbourne awaiting an appeal, said on Instagram.

"It's a shame what is going on," said Dusan Stojic, a 67-year-old pensioner, who shed tears during a demonstration in Belgrade.

"First, you call him and tell him that all documents are okay, and then you keep him in such an institution," said David Lukovic, a 23-year-old entrepreneur, referring to the hotel where Djokovic is being held which has allegedly been serving maggot-ridden food.

Others mirrored the sentiment.

"It's not the vaccine that's the problem, it's because he's Serbian and the best tennis player in the world," tweeted Djokovic fan Marinko Bulatovic.

"Enough of the chicanery and abuse just because the greatest comes from a small country in the Balkans," added Marija Santic.

The row has struck a popular chord, with Serbia's president offering the player full diplomatic support.

"What is not fair play is the political witch hunt by everybody including the Australian prime minister pretending that the rules apply to all," Aleksandar Vucic told the media.

The Australian ambassador to Serbia was handed a verbal protest note over the "inappropriate treatment" of the player in Melbourne.

"Djokovic is not a criminal, terrorist or illegal migrant, but was treated that way by the Australian authorities, which causes an understandable indignation of his fans and citizens of Serbia," the foreign ministry said.

Florian Bieber, a Balkan expert from the University of Graz in Austria, said the controversy was "being reframed not just by his parents, but also by Serbian media and the president as a national issue".

"A strong victim narrative fits into the nationalist view growing in strength in Serbia of a Western world that is inherently anti-Western," he added.

Djokovic, who has won a record-equalling 20 Grand Slam titles, is immensely popular in Serbia for bringing fresh pride to his country following the bloody wars of the 1990s, when the Balkans were a byword for war crimes and ethnic cleansing.

Resentment among swathes of the population continues to simmer in Serbia over what many see as unfair treatment during the bloody breakup of Yugoslavia, when the international community hit Belgrade with sanctions and later air strikes.

History has not been kind to Serbs. Caught in between expanding empires, the country has been occupied, invaded and laid to waste by a series of internecine wars over the centuries.

During a demonstration in Belgrade on Thursday, Djokovic's father referenced the country's violent past while rallying support for his son.

"More than 100 years ago there were six million of us," Srdjan Djokovic screamed into a megaphone, pointing out that the country's population has changed little in the past century.

"Why? Because they were killing, bombing, sanctioning us, chasing us from our country."

During an earlier press conference, Srdjan Djokovic compared his son's plight with that of Jesus, saying "Novak is also crucified".

On Friday, he slammed Australian Prime Minister Scott Morrison calling him, in a word play, a "big villain". In Serbian, word 'scot' which is pronounced like name Scott, means villain.

"This Scott, this prime minister, this big villain, dared to talk like this about Novak. Shame on him and all those politicians there," he told reporters during a rally in downtown Belgrade.

Morrison has defended revoking Djokovic's visa saying that "rules are rules and there are no special cases".

As Serbia celebrates Orthodox Christmas this week, the leader of the Serbian Orthodox Church offered his support.

"Only a pale shadow will remain from troubles and temptations that you are facing on Christmas," wrote Patriarch Porfirije on social media.

"Millions of Orthodox Serbs are praying for you." 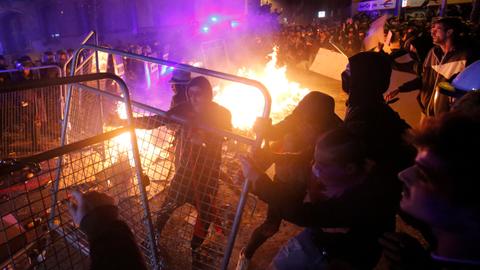