Defenders of Spanish unity massed in the streets of Catalonia's capital Barcelona on Sunday, waving national and European flags and chanting "Viva Espana" two days after regional lawmakers voted to sever the region from Spain.

Protesters flocked in their tens of thousands through Barcelona's streets, in a sea of red-and-yellow Spanish flags, brandishing placards reading "De Todos" (It belongs to all of us).

The stand-off has plunged Spain into its worst political crisis in decades, and raised alarm in Europe.

"We are all Catalonia," proclaimed a massive banner as the crowd chanted "Prison for Puigdemont", and "Long live Spain".

Secessionist leader Carles Puigdemont and his regional executive was axed by the central government on Saturday, a day after Catalan lawmakers voted to declare the region of 7.5 million people a republic.

"I am enraged about what they are doing to the country that my grandparents built," said protester Marina Fernandez, a 19-year-old student from Girona, a separatist stronghold.

In her hometown, she cannot speak out for Spanish unity or "leave my house with the Spanish flag," she said.

As the march got under way, the deputy president of the deposed Catalan government lashed out at Madrid over what he called a "coup d'etat".

"The president of the country is and will remain Carles Puigdemont," the axed leader's deputy Oriol Junqueras wrote in Catalan newspaper El Punt Avui.

Junqueras used the word "country" to refer to Catalonia, and signed off as the region's "vice president".

"We cannot recognise the coup d'etat against Catalonia, nor any of the anti-democratic decisions that the PP (Rajoy's ruling Popular Party) is adopting by remote control from Madrid," he wrote.

Flor Pena, a 59-year-old originally from the northwestern autonomous region of Galicia, described the separatists' actions as "shameful".

"The thing to do now is to beat them at the polls."

Miguel Angel Garcia Alcala, 70, travelled from the town of Rubi, 22 kilometres from Barcelona, for the march, held near where tens of thousands of people had celebrated the new "republic" with song, wine and fireworks just two days earlier.

"I do not agree with these people holding us by the hair," Alcala told AFP. "It is illegal what they have done... They are dictators."

For 35-year-old office worker Silvia Alarcon, the separatists "live in a parallel world, a little surreal. I am angry that they claim to speak for all Catalans when they do not."

The Catalan crisis was triggered by a banned independence referendum on October 1 shunned by many, and marred by police violence.

Then on Friday, Catalan lawmakers passed a motion, by 70 votes out of 135 in the secessionist-majority regional parliament, to declare the region of 7.5 million people independent from Spain.

Rajoy responded by deposing the regional government, dissolving its parliament, and calling December 21 elections to replace them.

For those who demand democracy for Catalonia, listen to 1 million people in Barcelona who do not want independence #TotsSomCatalunya pic.twitter.com/y4l10Ft7X6

Ines Arramadas, leader of the Ciudadanos main opposition party in Catalonia, told journalists at the march that a majority of the region's inhabitants wished to "recover our future".

"Today the silenced majority of Catalonia returns to the streets. It once again shows, with dignity and respect, that the majority of Catalans feel Catalan, Spanish and European," she said, a day after thousands of people took part in a similar march in Madrid.

Representatives of Rajoy's conservative PP were also at Saturday's rally, in what for some resembled the start of an election campaign. 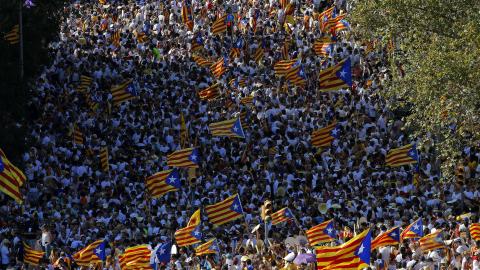 Catalonia announces date for vote on independence from Spain