Crossing the buffer zone in Cyprus will soon mean entering a new time zone. The Turkish Cypriot government has decided to stick to summertime hours throughout the year.

The tiny eastern Mediterranean island of Cyprus will have two time zones after October 30. The Turkish Cypriot government in the north has decided to extend summer time hours.

In a vote on Thursday, lawmakers in the Turkish Cypriot parliament agreed to follow Ankara.

Turkish lawmakers a day earlier decided not to turn back their clocks by an hour when summer ends next month.

The ruling published in Turkey's Official Gazette said it was aimed at "making more use of daylight".

Turkey's Energy Minister Berat Albayrak tweeted that the ruling would reduce the amount of time spent in darkness during work hours.

Meanwhile, the Greek Cypriot administration, which is based south of the Green Line, a buffer zone dividing the island, will go back an hour. This means the Turkish north will be an hour ahead throughout the winter months.

The time difference between the north and the south of Cyprus could create confusion. International mediators will need to specify times for meetings between Turkish Cypriot and Greek Cypriot representatives.

Social media users have questioned what the time will be in the UN-controlled buffer zone, where negotiations are held.

Travellers could also be left baffled. Flights arriving to and departing from Ercan airport in the Turkish Republic of Northern Cyprus will operate according to summertime hours, while arrivals and departures at airports in the south will follow daylight-saving hours.

With two different time zones in Cyprus, we can finally get jetlag without leaving the island. Alternatively we can also time travel.

Banks in the north will open and close one hour before banks in the south, while electronic devices like mobile phones that automatically adjust to time zones may be affected,. This could cause chaos for people living close to the buffer zone.

https://t.co/yAnHdNhp2Q Brilliant... Travel in the future just a few km away from my town haha

People constantly traveling between the two sides of the island, such as those who live in the north but work or study in the south, will also be affected by the change.

On New Year's Eve, the Turkish Cypriot north will enter 2017 an hour before the Greek Cypriot south.

Cyprus has been divided since 1974, when Turkey intervened to create a safe haven for Turkish Cypriots, following a coup led by the Greek junta to annex the island.

Peace talks to reunite the island are ongoing but disputes over land rights and sharing natural resources have slowed the process. 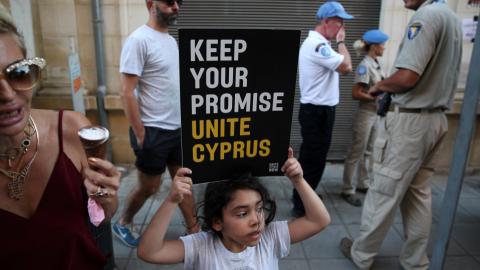