Responsibility for the 2010 plane crash that killed Polish President Lech Kaczynski along with 95 other people lay with the then government of Donald Tusk, the late president's twin brother and leader of the current ruling party said on Sunday at an event to commemorate the disaster.

The plane crash in Russia, which also killed the president's wife, the central bank chief and several military top brass, led to bitter political divisions in Poland, after initially uniting the nation in grief.

Jaroslaw Kaczynski, the head of Poland's ruling Law and Justice party and a former prime minister himself, took aim at Tusk, who is now president of the European Council which is the summit of EU leaders, saying guilt and punishment needed to be apportioned before forgiveness could be offered.

"One wanted to kill our memory, as one was afraid of it. Because someone was responsible for the tragedy, at least in moral terms, irrespectively of what were its reasons," Kaczynski said in a speech marking the sixth anniversary of the crash.

"The former government was responsible for that. Not Ms Kopacz government of course, but Donald Tusk's government."

Tusk was Poland's prime minister when the crash happened, and he was succeeded by his protege, Ewa Kopacz.

A government inquiry into the crash had blamed pilot error. But the new government, led by Kaczynski's party, which came to power in October, has said an onboard explosion could have caused the crash.

Jaroslaw Kaczynski has long accused Tusk of being indirectly responsible for the crash, which, in his view, was at least partially a result of the government's negligence.

Earlier in the day, President Andrzej Duda addressed thousands of Poles gathered in front of the presidency to commemorate the crash.

Duda appealed to Poles to forgive each other and reconcile over political divisions, but speaking later in the evening at the same venue, Kaczynski gave a stern response.

"Forgiveness is necessary but, but forgiveness after admitting guilt and administering proper punishment. This is what we need," Kaczynski said. 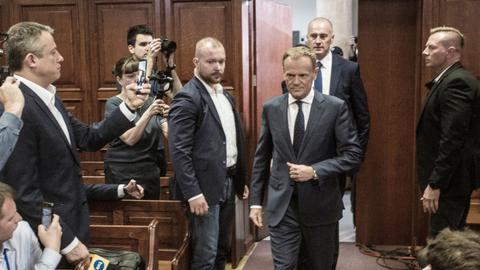