Who will be the UK's next PM?

Bookmakers place Boris Johnson as the top contender for the position, followed by interior minister Theresa May and Justice Secretary Michael Gove.

Speculations abound as to who will take over the role of Britain's new Prime Minister after David Cameron resigned.

Cameron, the leader of the Conservative Party and Britain's Prime Minister since 2010, resigned after losing the battle to keep the country in the European Union.

Bookmakers place Boris Johnson as the top contender for the position, followed by interior minister Theresa May and Justice Secretary Michael Gove.

Alexander Boris de Pfeffel Johnson (52) is the former mayor of London and leader of the Leave campaign in the EU referendum.

His popularity has soared since the success of the campaign.

As mayor of London from 2008 to 2016, he banned alcohol consumption on public transportation, introduced new routemaster buses and cycle hire schemes to ease traffic flows and oversaw the 2012 London Summer Olympics in his constituency.

Those who support Johnson applaud him for his strategic mind.

Johnson though, hasn't commented on whether he will run for prime minister or not.

May is expected to announce her candidature this weekend and is likely to win support of the MPs who may not be willing to put their weight behind Boris Johnson.

May (59) was appointed Home Secretary in 2010 after Cameron became Prime Minister.

Work and Pensions Secretary, Crabb (43) announced via email to Tory MPs on Monday that he will stand as a contender as the Conservative Party leader.

He's been a lawmaker for a constituency in Wales since 2005, became a Cabinet minister in 2014 when he was made Welsh Secretary and moved up to his current job since March 2016.

"What I want to see in the next few days is a candidate emerge who understands the enormity of the situation that we're in," Crabb said on Monday.

As a former state school pupil who once worked as a building site labourer, his background contrasts to Cameron and Johnson, who attended the elite Eton College.

An author and former columnist for The Times, Gove (48) was first elected to the House of Commons in the 2005 election for the safe Conservative seat of Surrey Health.

He played a major role in the UK's referendum on EU membership and acted as the co-convenor of the Leave Campaign.

He rose eyebrows after comparing economic experts' warnings about the effects of a Brexit to the Nazis who smeared Albert Einstein in the 1930s, but later apologised.

A personal friend of Cameron, he is regarded as a potential candidate, but stated he is not right for the job.

An opinion poll conducted by YouGov.com this week suggests that public support for May's candidacy has grown, and similarly, her popularity in the race for the Conservative Party's leadership.

The poll shows May at 19 percent, narrowly beating Johnson at 18 percent when asked who would make the best Prime Minister.

In comparison, public support for Gove is at 5 percent and Crabb at 2 percent.

Nominations for the Conservative Party leadership are set to open on Wednesday and Thursday.

The new Prime Minister and Tory leader will be in place by September 2. 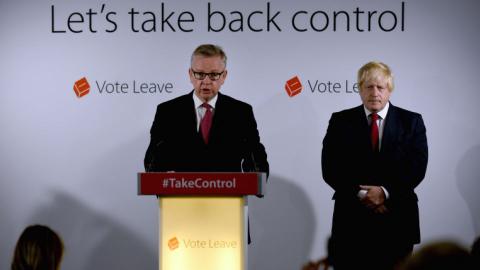 Gove says UK's next leader should be a "Leaver"