Chelsea cancels a victory parade while both UEFA and Formula One each announce a minute's silence.

Messages of solidarity and condolences have poured in from across the sports world for the victims of a suicide bomb attack which left 22 people dead after a British concert by US singer Ariana Grande in Manchester.

The explosion occurred as the audience was leaving Grande's concert in the northern English city.

Daesh claimed responsibility for the attack which also wounded dozens others.

The Union of European Football Associations (UEFA) said a minute of silence will be observed before the Europa League final set to be held tonight in Stockholm.

A minute's silence will take place before the #UELfinal as a mark of respect for victims of the Manchester attack. https://t.co/3N6xC88pgP

"In light of these tragic events, we feel it is inappropriate to go ahead with the victory parade in London on Sunday," the club said in a statement.

Both top tier clubs in Manchester also stood in solidarity:

The thoughts and prayers of everyone at MCFC are with those affected following the horrifying events of last night.https://t.co/KzFQY6ZG2K

Formula One organisers are also planning to hold a minute's silence before Sunday's Monaco Grand Prix as a mark of respect for Manchester victims.

A Formula One Management source said the 10 teams, a majority of them British-based, had also agreed to carry the #Manchester hashtag on their cars.

South Africa's cricket team manager said the side had "genuine concerns" about remaining in England following the attack, but expressed commitment to stay for the three-month tour.

After security briefings from the England and Wales Cricket Board (ECB), Proteas team manager Dr Mohammed Moosajee said his side were happy to remain in England as things stood.

Britain's deadliest terror attack for 12 years took place just two days before the start of a three-match one-day series between England and South Africa in the nearby city of Leeds. 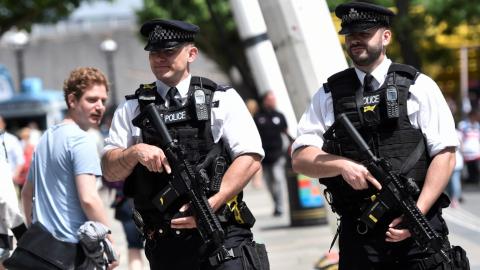