The Greek football teams of Istanbul

PAOK Thessaloniki and AEK Athens may play in the Greek Superleague today, but a century ago their original founders were playing in Istanbul under the name Pera Club. TRT World looks into why they moved and what they left behind.

In May 2013, anti-government riots broke out all over Turkey after police clashed with demonstrators holding a sit-in protest in Istanbul's famous Gezi Park, near Taksim Square. The government was planning to reconstruct an Ottoman-era military barracks which was demolished in 1940 to make way for the park, but a tense stand-off with protestors that lasted a number of weeks stalled the project. In June this year, Turkish President Recep Tayyip Erdogan revived the debate when he announced the redevelopment will go ahead as planned. Besides the barracks, a mosque and a shopping mall will also be built.

But the site was also once home to the historic Taksim Stadium, where the Turkish national football team played its first match against Romania on October 26, 1923. It was the birthplace of many of Istanbul's great football teams - including Galatasaray, Fenerbahçe and Beşiktaş - all of whom shared the ground before finally building their own stadiums. Interestingly, the stadium also once hosted a number of teams formed by local Greeks and Armenians before population exchanges saw their numbers dwindle following the collapse of the Ottoman Empire. Although most of these teams became defunct over time, some of them were re-established in their new homeland of Greece.

Both teams trace back to the same source. In 1877, three local Greek intellectuals of Istanbul - K.D. Kostarakis, I.A. Zervoudakis and A.K. Stefopoulos - established the Clio sports club, which was later renamed Hermes in 1884. The team was rebranded as Pera Club in 1914, named after Istanbul's historic Pera district, which is today known as Beyoğlu. By then, many of Istanbul's Greeks had already resettled in Greece, primarily in Thessaloniki and the capital Athens. This included the majority of Pera Club's players and administrators. After the population exchange of Turks in Greece for Greeks in Turkey in 1923, a year after Greece's defeat in the Greco-Turkish War, Greek sports clubs in Istanbul became virtually extinct.

But Greek sportsmen were not put off by the relocation. Without wasting much time they regrouped and established clubs in their new home. April 13, 1924 was a momentous day that saw the coming together of Greek athletes who had migrated from Istanbul in the Lux sports store on Veranzerou Street, central Athens. Store owners Konstantinos Dimopoulos, Aimilios Iona and Menelaos Iona merged the signatures of over 40 Istanbul Greeks to form AEK Athens.

In December 1925, players who had migrated to Thessaloniki established AEK Thessaloniki. The club was originally founded for Greek migrants from Istanbul, and like AEK Athens, AEK Thessaloniki also featured the Dikefalos Aetos - the two-headed eagle - on its club logo. The symbol was traditionally used by the Palaiologos dynasty, the last rulers of the Byzantine Empire, whose capital was based in Istanbul. Due to internal disagreements regarding the administration of the club, a number of staff broke off to form PAOK. A local rivalry between AEK Thessaloniki and PAOK lingered until the former was dissolved in 1927 and was gradually absorbed by the latter. By 1929, the merger was complete and PAOK also adopted the two-headed eagle emblem.

While AEK Athens and PAOK Thessaloniki prospered in both domestic and international competitions, life on the other side of the Aegean did not come to a complete stop. Pera Club may have lost the vast majority of its Greek members in the population exchange, and in doing so lost the original spirit with which it was founded, but it continued to exist in Istanbul. In 1923, the club changed its name once more to Beyoğlu Sports Club. Despite being an amatuer club with limited finances, Beyoğlu SC prides itself as being one of the oldest, if not the oldest, existing sports club in Turkey today. Now largely consisting of Turkish athletes, the club's administration still largely comprises of ethnic Greeks.

The club enjoyed tremendous support from the few local Greeks who remained in Istanbul after the population exchange and was one of the first clubs to groom Turkey's international legend Lefter Küçükandonyadis, an ethnic Greek footballer from the island of Büyükada who went on to play for Fenerbahçe before joining ACF Fiorentina and OGC Nice. He finally ended his playing career at Beyoğlu SC's sister team AEK Athens. But support for Beyoğlu SC began to run dry after Küçükandonyadis departed. The club has not played top flight football since 1964.

In 2013, Beyoğlu SC's late president Dimitri Koçias told Aktuel, a Turkish sports magazine, that the club's downfall began in the mid-50s. "In ‘56 the national league was established and our downfall began. Teams with money and a big budget were promoted to the First Division, but we remained in the local leagues. (Despite that) we built a quality team in the local league. We were promoted to the First Division but we couldn't stay up there. Three years later we were back down," Koçias explained. "We played many games with Fenerbahçe, Galatasaray and Beşiktaş...and earned victories against all three."

Toli Harizanos, who took over the club's presidency after Koçias passed away, told TRT World the club has received hardly any help from its sister clubs AEK Athens and PAOK. "The help we are getting is amazing," he said sarcastically. "When Demis Nikolaidis was the president of AEK, they came to Istanbul and offered to help us. In the same month they called from Athens and said they were sending materials to Thessaloniki...After the things arrived, we saw that everything was to be thrown away."

"With PAOK we do not have any relations. We have not asked anything from them. I only spoke to them about visiting in the future," Harizanos added.

A source from AEK Athens who wished to remain anonymous as he was not authorised to speak to the press told TRT World that his club has no obligation to maintain ties with Beyoğlu SC. "It is wrong to believe AEK is a sequel of Pera Club," the source said, stating that AEK is a separate club that was established in 1924.

Asked whether AEK was running any programmes to encourage ethnic Greeks still living in Turkey to engage in sports, the source said the club currently has no such programme but may consider launching one in the future. The club at present has "other priorities," he said.

AEK Athens, which finished in third place in the Greek Superleague last season and lifted the Greek Football Cup for the 15th time, just a year after being promoted back to the top tier, is now preparing to compete in the UEFA Europa League. Just three years ago, the team was relegated for the first time in its history as it struggled to overcome immense debts arising from years of mismanagement.

Nikos Zeginoglou, a 27-year-old professional basketball player who used to play for AEK's basketball team, told TRT World he was not aware that Pera Club had continued to function under its new name, but when asked if he would like to see AEK and PAOK reach out more to help the struggling club, he said, "They must."

"AEK and PAOK must help because it is the living story of their teams," said Zeginoglou, who currently plays basketball for Ikaros Kallitheas.

Mentioning that his father was born in Istanbul before migrating to Greece as a young man, Zeginoglou said that he would be pleased to see the rebuilding of the Taksim Stadium in Gezi Park, adding that it could serve as a museum. However, he played down the chances of AEK and PAOK ever returning to their land of origin, saying it would not be practical.

"AEK and PAOK may have been founded in Constantinople but they were founded by Greeks. They are Greek teams and they belong in Greece," he said. "Constantinople for us is a thing of the past."

Theophilos Freris, a Greek sports journalist, also told TRT World that Greek football teams are currently too distracted by financial woes and corruption scandals to give priority to their brethren in Istanbul. "If the stadium is rebuilt maybe they (AEK Athens and PAOK) would like to play friendlies there, but relocating their teams back to Turkey is out of the question," he said. "They no longer have a connection with Istanbul."

Stellianos Andreas Avraamides, whose grandfather Savvas used to play as a striker for PAOK, said that rebuilding the Taksim Stadium would be a "good gesture" but likewise rejected the idea of Greek teams relocating to Turkey. "Personally I think that it is a terrible idea because it would reignite tensions," he told TRT World, pointing out that PAOK has strong far-right political affiliations. On the other hand, AEK Athens, which leans more towards the left, might be more likely to accept such an invitation, he said.

He also said that the Greek teams have no responsibility to support Beyoğlu SC but may "donate out of the goodness of their hearts." Finding funds to survive is Beyoğlu SC's responsibility, he added.

Harizanos, an Istanbul-born Greek in his late seventies who enjoyed a brief spell in the administration of another Athens-based sports club also known as Pera Club from 1974 to 1987, does indeed have a game plan to generate funds for Beyoğlu SC. The club wants to revive itself through table tennis. He showed TRT World staff visiting the club's headquarters in Taksim an old theatre on the top floor of the building, which they hope to renovate for this sport. But even that has costs.

"In order to make the ping-pong hall, which will have ten tables, we have horrifying expenses. The floor and the lighting alone cost around 35,000 Turkish lira ($11,600). We asked for financial support from all the churches of the parish. They all sent something and we managed to collect the money," he said.

"We organise two or three dinners a year. We always bring music bands from Greece. We invite the community to attend the meal which costs around 150 Turkish lira per head while we, the administration, spend thousands of liras to organise it," the elderly club president added, laughing. "We also organise some trips or we receive some charity. This is how we support ourselves."

Asked about what he thinks the future holds for Beyoğlu SC, Harizanos said, "The club will go as long as it goes... If the families get excited about the table tennis idea, maybe they will want to do something with it." 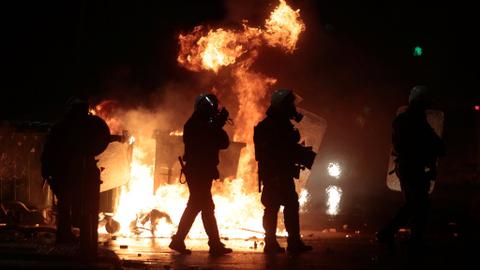