1
One in three schoolchildren does not have access to drinking water: UN
2
Nine-year-old Turkish boy donates his pocket money to earthquake victims
3
Cleaner of 17 years a ‘symbol’ of dedication at hospital in Türkiye
4
Türkiye's powerful quakes move Anatolian continent by up to 10 metres
5
UAE 'Sultan of Space' grapples with Ramadan fast on Int'l Space Station

Russian adventurer Fedor Konyukhov has landed safely in a field on a private property in West Australia after setting a world record for circumnavigating the world solo in a hot air balloon.

Konyukhov (64) emerged from the balloon's gondola after more than 11 days aloft expressing his appreciation for the smell of the earth, and "how wonderful it is", according to millionaire businessman and fellow aviator Dick Smith, who was on hand to assist with the landing.

Mind boggling that #FedorKonyukhov flew back over the EXACT spot on planet Earth that he took off from! pic.twitter.com/JN2w8Pvr3x

Konyukhov, who embarked on his epic journey from Northam in Western Australia on July 12, set the record of just over 11 days when he passed above the township 100 km north east of Perth.

The Russian balloonist beat the previous record of 13.5 days set in 2002 by the late Steve Fossett.

The moment record breaker #FedorKonyukhov stepped out of his balloon after 11 days in the air @channeltennews pic.twitter.com/cq5JdDlQWW

In completing the epic journey, Konyukhov flew directly over Northam, a feat described as "incredible" by Smith.

"After going 34,000 kilometers around the world he crossed the runway where he took off from," Smith said.

"That's never happened before. It was mainly luck and it's just unbelievable."

Smith completed the first solo circumnavigation of the world by helicopter in 1983.

When Konyukhov broke the record he was directly over Northam at an altitude of approximately 6,000 meters and traveling at 60 kilometers per hour, Smith said.

Chasing this yesterday was quite an adventure.Although nothing compared to #FedorKonyukhov and his new world record pic.twitter.com/uvvZQntzHG

He said the Russian had been advised to fly for another hour in search of safer terrain on which to land.

During the journey Konyukhov flew as high as 10,000 meters and dealt with extreme temperatures - as low as minus 56 degrees Celsius - that caused his oxygen masks and drinking water to freeze.

Konyukhov also had to cope with the failure of his heating system and fierce electrical storms.

On the last leg of the journey, he was pushed far south toward Antarctica as he crossed the southern ocean between the Africa and Australia.

"It is scary to be so down south and away from civilization," Konyukhov wrote in one entry in a blog he updated at various points during the flight.

"This place feels very lonely and remote … just a thick layer of cyclonic clouds below me and dark horizon to the east." 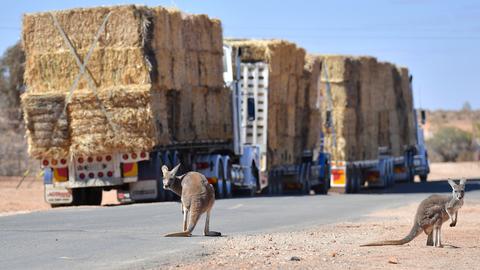 1
One in three schoolchildren does not have access to drinking water: UN
2
Nine-year-old Turkish boy donates his pocket money to earthquake victims
3
Cleaner of 17 years a ‘symbol’ of dedication at hospital in Türkiye
4
Türkiye's powerful quakes move Anatolian continent by up to 10 metres
5
UAE 'Sultan of Space' grapples with Ramadan fast on Int'l Space Station