Coronavirus pandemic has killed over 3.7 million people and infected over 173 million globally. Here are updates for June 5:

APEC commits to expediting the transit of Covid vaccines

Ministers from Asia-Pacific trade group APEC agreed to expedite the transit of Covid-19 vaccines and related goods, but stopped short of agreeing to remove tariffs on them.

Prior to the start of the meeting, host New Zealand wanted APEC's 21 members to agree on "best practices guidelines" on the movement of vaccines and related medical products across borders, a person familiar with the talks told Reuters.

New Zealand believes an agreement is needed to show that APEC is responsive and relevant to the crisis facing the world.

In a statement after the meeting, APEC ministers said they would "expedite the flow and transit of all Covid-19 vaccines and related goods through their air, sea and land ports."

"We will consider voluntary actions to reduce the cost of these products for our people, particularly by encouraging each economy to review its own charges levied at the border on Covid-19 vaccines and related goods," the statement said.

The first cruise ship leaving Venice since the pandemic is set to depart amid protests by activists demanding that the enormous ships be permanently rerouted out the fragile lagoon, especially Giudecca Canal through the city’s historic centre, due to environmental and safety risks.

Italian Premier Mario Draghi’s government pledged this winter to get cruise ships out of the Venice lagoon, but reaching that goal will take time.

But even an interim solution is not likely before next year and getting ships out of the lagoon could take years.

Venice has become one of the world’s most important cruise destinations over the last two decades, serving as a lucrative turnaround point for 667 cruise ships in 2019 carrying nearly 700,000 passengers, according to the association Cruise Lines International (CLIA).

The long battle over cruise ships in Venice ramped up after the Costa Concordia cruise ship sank off Tuscany in 2012, killing 32 passengers and crew members.

Turkey has reported 6,126 new cases, including 542 symptomatic patients, and 92 virus-related deaths across the country in the last 24 hours.

The country has so far administered over 30.44 million doses of Covid-19 vaccines since it launched a mass vaccination campaign in mid-January, according to official figures released.

Turkey's overall case tally is now over 5.28 million, while the nationwide death toll has reached 48,068 with the new fatalities.

Italy reported 57 coronavirus-related deaths against 73 the day before, the health ministry said, while the daily tally of new infections decreased to 2,436 from 2,557.

Italy has registered 126,472 deaths linked to Covid-19 since its outbreak emerged in February last year, the second-highest toll in Europe after Britain and the eight-highest in the world.

The country has reported 4.23 million cases to date.

Over 2.9 billion coronavirus vaccine have been administered so far worldwide, figures compiled by Our World in Data showed.

China leads the global count with over 744.4 million jabs, followed by the US with 299.1 million, according to the tracking website.

The South American country has to date received three million doses of vaccines against the novel coronavirus, namely the Sputnik V and Sinopharm shots from political allies Russia and China.

Rodriguez did not detail how many doses of EpiVacCorona Russia would send, nor when local manufacturing would begin.

Russia's embassy in Caracas confirmed the deal in a tweet.

Authorities in the southern Chinese industrial hub of Guangzhou imposed more restrictions on business and social activity, seeking to curb the spread of Covid-19 cases.

The city's Nansha, Huadu and Conghua districts have ordered all residents and any individuals who have travelled through their areas to be tested for the coronavirus.

China reported 24 new coronavirus cases on the mainland of those, 11 were locally transmitted cases in Guangdong province where Guangzhou is located, while the others were imported, the National Health Commission said. There were no new deaths.

A record 600,000 doses of Covid vaccine were administered in Italy, authorities said, putting the country in second place in Europe for the number of people fully vaccinated.

"Yesterday was marked by a record number of injections in 24 hours which touched the 600,000 mark while the number of doses administered crossed the 37-million mark," the government body in charge of vaccinations said.

"Italy is in second place in Europe in terms of the number of people fully vaccinated, just behind Germany and ahead of France and Spain," it added.

The government coronavirus task force said 399 people had died of coronavirus-linked causes in the past 24 hours, pushing the national death toll to 123,436.

The United Nations chief is welcoming the Biden administration’s announcement that it will be donating millions of doses of vaccine to the UN-backed COVAX facility as well as to individual countries and UN front-line personnel in challenging and dangerous locations.

UN spokesman Stephane Dujarric says Secretary-General Antonio Guterres is also “extremely grateful” to the US government for including UN personnel and diplomats and staff of the 193 UN member nations in the US vaccination programme.

Biden announced Thursday the US will swiftly donate an initial allotment of 25 million doses of surplus vaccine overseas through the COVAX programme, which to date has shared just 76 million doses with needy countries.

Overall, the White House has announced plans to share 80 million doses globally by the end of June, most through COVAX.

Dujarric said the donation to UN frontline personnel will allow staff members “to stay and deliver critical services to vulnerable people around the world in a safe and effective manner.”

Guterres renews his call for countries to share vaccines, particularly with countries struggling with new surges and variants, Dujarric said.

“There is an urgent need for increased global solidarity to ensure that vaccines are available to everyone, everywhere,” he said.

That was up from the 472 domestic infections reported.

The tally of infections stood at al 28.69 million and the death toll at 344,082, data from the federal health ministry showed.

Amid brutal case surge, Afghanistan hit by a vaccine delay

Afghanistan is battling a brutal surge in infections as health officials plead for vaccines, only to be told by the World Health Organization that the 3 million doses the country expected to receive by April won't be delivered until August.

"We are in the middle of a crisis," Health Ministry spokesperson Ghulam Dastigir Nazari said this week, expressing deep frustration at the global vaccine distribution that has left poor countries scrambling to find supplies for their people.

Over the past month, the escalating pace of new cases has threatened to overwhelm Afghanistan's health system, already struggling under the weight of relentless war.

In part, the increase has been blamed on uninterrupted travel with India, bringing the highly contagious Delta variant, first identified in India.

Also, most Afghans still question the reality of the virus or believe their faith will protect them and rarely wear masks or social distance, often mocking those who do.

Until just a week ago, the government was allowing unrestricted mass gatherings.

The number of confirmed cases in Germany increased by 2,294 to 3,697,927, data from the Robert Koch Institute (RKI) for infectious diseases showed.

China reported on Saturday 24 new cases on the mainland for June 4, the same number as a day earlier, the country's health authority said in a statement.

Of the new infections, 11 were imported, the National Health Commission said, and the 13 local cases were all in southern Guangdong province. There were no new deaths.

Brazil has registered 1,454 Covid-19 deaths and 37,936 new cases, according to data released by the nation's Health Ministry.

Brazil has now registered 470,842 total coronavirus deaths and 16.84 million confirmed cases. Daily deaths have decreased significantly from the peak of the country's second wave in April, but remain high by historical standards.

Meanwhile, Brazilian health regulator Anvisa has voted to approve imports of Russia's Sputnik Vand India's Covaxin Covid-19 vaccines, but with conditions on both.

The 4-1 vote by Anvisa's board follows rulings in April to reject Brazilian states' request for Sputnik V due to a lack of data guaranteeing its safety, quality and effectiveness, and inMarch to reject Covaxin because it did not meet Anvisa'smanufacturing standards.

Australia's second-most populous state Victoria has reported a small increase in locally acquired Covid-19 cases as authorities hunted for the source of a highly infectious variant that has been detected in a new cluster.

Five new local cases were reported, taking Victoria's total to 69 in the latest outbreak, as the state capital Melbourne entered its second weekend of a hard lockdown, due to end on June 10. Curbs were eased for the rest of the state on Friday.

Saturday's count was up from four new locally acquired cases on Friday.

US sending $266.5 mn in aid to Afghanistan for Covid response

The United States has announced more than $266 million in additional humanitarian aid for Afghanistan, intended mainly for its Covid-19 response, as foreign troops continue their withdrawal from the country.

The aid is intended for areas such as protective equipment, shelter, food and health and hygiene services related to the Covid pandemic.

It also provides for "protection needs for the most vulnerable Afghans," including at-risk women and girls.

Separate government data recently published suggests the real death toll may be at least 60 percent above the confirmed figure.

Chile has said that people inoculated with AstraZeneca's Covid-19 vaccine should get their second dose, but health officials put a new limit on the age of recipients until an investigation into possible complications is completed.

The government raised the minimum age of men eligible for the shots to 45 years.

Regulators initially approved the vaccine for men over 18 and women over 45.

Men over 45 who received the first dose of AstraZeneca should stick with the plan to get the second shot, he said.

Airlines press US on refusal to lift travel restrictions

Major airlines are pressing the United States government on its decision not to move quickly to relax Covid-19 restrictions that block travelers who have been in much of Europe and elsewhere even as other countries began to ease prohibitions.

On Monday, the heads of several major airlines as well as the chief executives of Heathrow Airport and industry group the US Travel Association will hold a virtual news conference to push for removal of travel restrictions between the United States and the United Kingdom.

The airline CEOs on May 11 had called for a summit between US officials, UK officials, and airlines to discuss how to "expeditiously reopen transatlantic travel."

Since March 2020, the United States has barred nearly all non-US citizens who have been in the UK within the last 14 days from entering the country.

Most US travelers visiting the UK must quarantine for 10 days upon arrival.

Airline and administration officials say no change is expected in the near term but add it is possible the restrictions could be removed as early as July 4 or thereabouts, but they caution no decisions have been made.

"Next Sunday, an airplane will leave for Moscow to bring back the active ingredient so production can begin immediately in Argentina," said Fernandez.

In December, Argentina was the first Latin American country to approve the Sputnik vaccine.

It has been approved in more than 65 countries but those do not include the United States or any in the European Union.

"We're delighted with the results from this vaccine because millions of Argentines' lives have been saved," said Fernandez.

Argentina has administered 10.4 milli on coronavirus doses so far, including the Sputnik, AstraZeneca and Sinopharm jabs.

The country of 45 million people has recorded 3.8 million cases and almost 80,000 deaths from Covid. 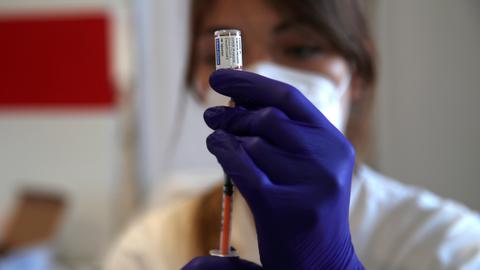 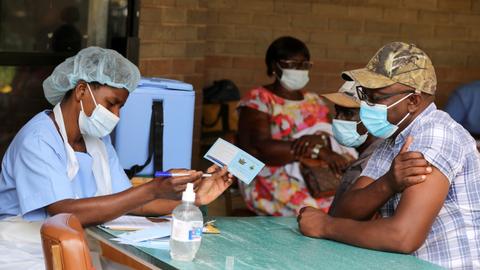