Novel coronavirus has infected over 80.7 million people globally and has claimed more than 1.7 million lives. Here are the updates for December 27:

The new variant of the virus linked to a rapid rise in infections in Britain has been detected on the Portuguese island of Madeira, the regional civil protection authority has said.

In a statement, the authority said the new variant was "detected in travellers who arrived in Madeira from the United Kingdom" but it did not specify how many people were infected with it.

France reports 8,822 new coronavirus cases and 173 fatalities over the past 24 hours, according to the official data.

The new variant of the virus circulating in Britain has been detected in two people who came to Norway from the country, the Norwegian Institute of Public Health said.

The travellers, who were not identified, came to Norway earlier in December and health workers will follow up with their close contacts, it said.

Norway imposed travel restrictions earlier this month on passengers from Britain amid concerns over the new variant, which is thought to be mo

Turkey reported 14,205 more virus infections, including 2,806 symptomatic patients, over the past 24 hours, the Health Ministry announced.

The overall caseload rose to 2.14 million with the latest additions.

The number of patients in critical condition now stands at 4,309.

Italy reported 298 virus-related deaths up from 261 the day before, the health ministry said.

Italy on Thursday became the eighth country in the world to exceed 2 million officially recorded cases.

The United Kingdom reported 30,501 new cases, government statistics showed, with a further 316 deaths within 28 days of a positive virus test.

The government's virus portal said the figures reflected data from England and Wales but said there was no new data from Northern Ireland and no new deaths data from Scotland owing to the Christmas holidays.

European Union nations have officially kicked off a coordinated effort to give Covid-19 vaccinations to some of the most vulnerable among their nearly 450 million people, marking a moment of hope in the continent's battle against the worst public health crisis in a century.

Shots were administered to health care workers, the elderly and some leading politicians to reassure the public that the vaccinations are safe.

The vaccines, developed by Germany's BioNTech and American drugmaker Pfizer, started arriving in super-cold containers at EU hospitals on Friday from a factory in Belgium. The EU has seen some of the world’s earliest and hardest-hit virus hot spots, including Italy and Spain.

Russia has reported 28,284 new virus cases, bringing the total number of confirmed infections to 3,050,248 after it crossed the 3 million mark on the previous day.

Russia's coronavirus crisis center said 552 patients had died in the last 24 hours and the overall national coronavirus death toll was at 54,778.

The Persian Gulf state of Oman has launched its Covid-19 inoculation campaign, with the sultanate’s health minister receiving the first dose of the Pfizer vaccine.

State-run media reported that the first batch of 15,600 doses was flown in industrial freezers to Muscat International Airport last week to vaccinate a priority group of older adults, health care workers and those with underlying health conditions starting on Sunday.

Another 28,000 doses of the vaccine by American drugmaker Pfizer and its German partner BioNTech are expected to arrive next month.

Oman says it aims to vaccinate 60 percent of its roughly 5 million people. The Health Ministry said the initial phase of the vaccination campaign would cover 20 percent of the population due to temporarily limited supply.

South Korea will extend social distancing measures introduced to try to curb the spread of the novel coronavirus pandemic for another six days, to January 3, as it continues to report near-record numbers of new cases each day.

For the run-up to Christmas and New Year holidays, the government banned gatherings of more than four people in greater Seoul and closed down ski resorts and other tourist spots. Beyond that temporary restriction, gatherings of more than 50 people are banned in greater Seoul and indoor restaurant dining is prohibited after 12 GMT (9 pm local time).

"We will observe the situation over the next week and decide whether to adjust the social distancing measures before January 3 when the special quarantine measures for the year-end holidays terminate," Health Minister Kwon Deok-cheol said, speaking at a briefing.

Sydney's outbreak continued with more than a quarter million people in lockdown as Australia's largest city awaited word on whether any public New Year's Eve celebrations will be allowed.

Seven cases of the new coronavirus were reported in New South Wales state, six linked directly to the outbreak in Sydney's northern beach suburbs, which are under a stay-at-home order until Wednesday. Infections stand at 122.

"I appreciate frustration levels are increasing as we get closer to New Year's Eve and days we stay at home increase," state Premier Gladys Berejiklian told a news conference.

"We hope to have some clear information for everybody tomorrow, or the latest the day after, on what the New Year's Eve and the next weeks will look like."

France has not ruled out imposing a third nationwide lockdown if coronavirus cases continue to rise, its health minister said, as the country braces for a possible post-Christmas spike.

"We will never exclude measures that are necessary to protect the public," Olivier Veran told the Journal du Dimanche.

"That is not to say we have made a decision, but that we are watching the situation hour by hour."

France has been registering around 15,000 new infections per day, and on Friday confirmed the first case of a new coronavirus variant that recently emerged in Britain.

The number of confirmed coronavirus cases in Germany has increased by 13,755 to 1,640,858, data from the Robert Koch Institute for infectious diseases has showed.

Japan is barring entry of all nonresident foreign nationals as a precaution against the new coronavirus variant that emerged in Britain.

The Foreign Ministry says the entry ban will start Monday and last through January 31.

Last week, Japan banned nonresident foreigners coming from Britain and South Africa after confirming the new variant in seven people over the last two days — five from Britain who tested positive at airports and two others in Tokyo.

Japan is also suspending the exemption of a 14-day quarantine for Japanese nationals and resident foreigners in a short-track program that began in November.

Thailand has confirmed 103 new infections of the coronavirus, including 94 domestic transmissions.

The new cases also include eight found in state quarantine and one infection in a person coming from abroad who did not enter quarantine, a government statement said without elaborating.

Mexico's health ministry reported 4,974 new confirmed cases of coronavirus infection and 189 additional fatalities, bringing the total in the country to 1,377,217 cases and 122,026 deaths.

The government said the real number of infected people is likely significantly higher than its reported cases.

Britain's Department of Health said on Sunday that medicines regulator MHRA (Medicines and Healthcare Products Regulatory Agency) must be given time to carry out its review of the data of the Oxford-AstraZeneca Covid-19 vaccine.

"We must now give the MHRA the time to carry out its important work and we must wait for its advice", a Health Department spokeswoman said, commenting on a Sunday Telegraph report that Britain will roll out the vaccine from January 4.

Europe rolls out vaccines in bid to leave pandemic behind

Europe launches a cross-border vaccination programme of unprecedented scale on Sunday as part of efforts to end a Covid-19 pandemic that has crippled economies and claimed more than 1.7 million lives around the world.

The region of 450 million people has secured contracts with a range of suppliers for over two billion vaccine doses and has set a goal for all adults to be inoculated during 2021.

While Europe has some of the best-resourced healthcare systems in the world, the sheer scale of the effort means that some countries are calling on retired medics to help out while others have loosened rules for who is allowed to give the injections.

After European governments were criticised for failing to work together to counter the spread of the virus in early 2020, the goal this time is to ensure that there is equal access to the vaccines across the entire region.

But even then, Hungary on Saturday jumped the gun on the official roll-out by starting to administer shots of the vaccine developed by Pfizer and BioNTech to frontline workers at hospitals in the capital Budapest.

Countries including France, Germany, Italy, Austria, Portugal and Spain are planning to begin mass vaccinations, starting with health workers on Sunday. Outside the EU, Britain, Switzerland and Serbia have already started in recent weeks.

That is the smallest in five days but still not far off from the record 1,241 infections logged on Friday.

The government plans to hold a meeting on Sunday when it may tighten distancing rules to the toughest level for the greater Seoul area.

Argentina will begin vaccinating its citizens against coronavirus on Tuesday using the recently delivered Russian Sputnik V vaccine, the government said on Saturday, following its approval by health authorities for emergency use.

Argentine president Alberto Fernandez and provincial governors said health personnel would receive their vaccines in less than 72 hours. Around 300,000 doses arrived in Argentina on Thursday, and subsequent shipments are expected early in 2021.

"The idea is that when the (southern hemisphere) fall arrives we will have a large number of at-risk people vaccinated," Fernandez said in a meeting with provincial governors.

Argentina, the third largest economy in Latin America, has been hard hit by Covid-19 and logged nearly 1.6 million cases of the coronavirus and 42,501 deaths from the disease.

Brazil has registered 307 new Covid-19 deaths, and 17,246 new cases of coronavirus, the health ministry said on Saturday, as President Jair Bolsonaro said he was not worried about delays in rolling out vaccinations in Latin America's biggest country.

Bolsonaro, one of the world's most prominent coronavirus skeptics, has been under fire for his handling of the outbreak. More recently, he has come under pressure over Brazil's vaccine rollout, which still lacks clarity amid a global scramble for immunisations.

On a stroll in Brasilia Saturday, he was asked by reporters if he felt pressured over criticism of the slow vaccine rollout.

"Nobody pressures me for anything, I don't give a damn about it," he said in a video aired on CNN Brasil.

The United Kingdom will roll out Oxford University’s Covid-19 vaccine from January 4, according to plans being drawn up by ministers, The Sunday Telegraph reported.

The government hopes to give the first dose of either the Oxford vaccine, which has been licensed to pharmaceuticals company AstraZeneca, or the Pfizer vaccine to 2 million people over the next two weeks, the newspaper said.

The Oxford vaccine is expected to be approved by medical regulators in days, the newspaper said.

Health officials in Ontario said on Saturday that two confirmed cases of the new Covid-19 variant first detected in the United Kingdom have appeared in the Canadian province.

The cases, identified in a couple in southern Ontario with no known travel history, exposure or high-risk contact, came as the province which went into a lockdown on December 26. 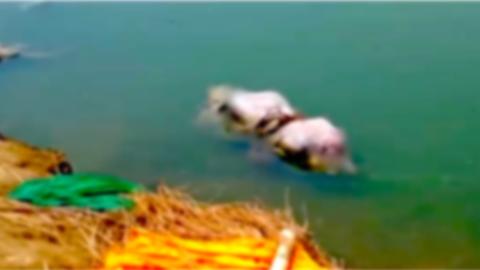