Man chokes to death during speed-eating contest in Japan

Contestants competed to see how fast they could eat five "onigiri" balls.

A 28-year-old man died in Japan after choking on a rice ball at a speed-eating contest, an event organiser said on Tuesday.

The man, whose name was withheld, died on November 16 in hospital three days after choking, said the local farmer's cooperative that sponsored the event in the western city of Hikone.

The man shoved his fifth rice ball into his mouth before passing out and was rushed to a local hospital where he later died, the organiser said.

The contest was composed of three sets of five contestants each.

"We had the first and the second sets finished and were watching the third group when this happened," said the official at the cooperative, who declined to be named.

Eating contests are popular events at various regional fairs held in Japan to promote local produce and culture, as in other countries where choking deaths have been reported.

After news of the latest death was reported, New York-based Kobayashi tweeted warnings about amateurs trying to eat too much too fast. 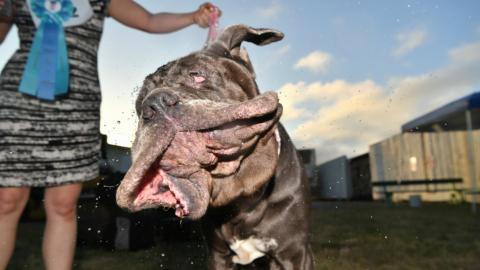 Martha is the biggest and the ugliest