1
What’s at stake for the Global South: COP26 jargon explained
2
Introducing the next generation of the internet: the metaverse
3
Colombia says 42,600 hectares deforested in Amazon in first half of 2021
4
UN: Greenhouse gas levels reach new record high in 2020
5
US panel endorses Pfizer Covid vaccine for younger children

When pandas are too comfortable in their habitat, their gene pool variation declines. Habitats broken up to an extent may urge them to seek food, shelter and mates elsewhere, contributing to greater gene variation.

When pandas are too comfortable in their habitat, they no longer move around in search of a better location and their chances of meeting other pandas in the wild declines, according to the latest research published in Conservation Biology.

The authors wrote that “the amount of habitat and its level of fragmentation had nonlinear effects on functional connectivity (gene flow) and inbreeding.”

The Guardian explains it as there being a “sweet spot” when it comes to aiding gene flow of the animals: “it is greatest when 80 percent of an area is considered an ideal environment for the bears – for example, containing bamboo forests. After that point, models suggest a rapid decline in the success of individuals in spreading out and reproducing.”

The Guardian refers to the Goldilocks principle being at play, from exercise to exoplanet exploration.  For example, an article featured in the British Journal of Sports Medicine tells the Goldilocks fairy tale: “a child comes across a house in the woods belonging to a family of bears. She tried the porridge, chairs and beds; some were too hot/large/hard, some too cold/small/soft, but some were ‘just right.’ In exercise and sports, the Goldilocks Principle of ‘just right’ has been acknowledged for decades, while in occupational life, physical activity has been designed to ‘not cause harm’ instead of being ‘just right.’”

According to an announcement made five years ago by the International Union for Conservation of Nature (IUCN), giant pandas are no longer on the ‘endangered’ list but are considered a ‘vulnerable’ population. This year Chinese officials made a similar statement.

However IUCN has noted that in the next 80 years, climate change could obliterate more than 35 percent of pandas’ bamboo habitat. One concern, as the Guardian puts it, is that the fragmentation of habitat could lead to pandas becoming isolated, that is, they might “end up without enough food or unable to breed.”

According to the WWF, while the Chinese government “banned logging in the panda's habitat in 1998 … new roads and railways are continuing to cut through the region, further fragmenting the forests. This isolates panda populations and prevents them from breeding.”

The study Complex effects of habitat amount and fragmentation on functional connectivity and inbreeding in a giant panda population is based on genetic analyses of panda faeces in Wolong nature reserve in China and also computer modelling.

The authors suggest that great pandas in the wild should not be 100 percent comfortable and that “it may make sense to think of local landscapes containing more than 80% habitat as being attractive to individuals rather than as impediments to their movement.”

“Although inbreeding in local panda populations was also affected nonlinearly by habitat amount, our results indicated that the lowest inbreeding occurred at the maximum amount of habitat,” they continue.

According to the study, the functional connectivity (gene flow) of pandas “increases as the proportion of habitat within a landscape rises, it declines when this proportion exceeds 80 percent,” says the Guardian.

The authors of the study, Connor T., Qiao M., Scribner K. et al, recommend that “land-scapes of patchier habitat should be prioritized for conservation and restoration in a scientiﬁcally informed manner (aiming for 80 percent habitat that maintains adequate edges) in order to maximize giant panda population health.”

This is because they believe that plenty of resources could mean pandas would stay where they are and would not need to go foraging for food, drink and mates.

As a result, the study points out the necessity of a large amount of habitat for great pandas in the wild, but that an environment that is not necessarily perfect is fine for their survival, in fact, could be beneficial.

“The finding that the optimum habitat amount for functional connectivity is below 100% provides hope for the already disturbed areas of panda habitat and suggests that such areas should not be discounted in management plans as being unsuitable,” the team writes.

“Additionally, by aiming for a ‘patchier’ landscape as the goal, plans to connect isolated panda subpopulations may be more realistic and feasible than previously thought.”

Talking to the Guardian, Claudio Sillero, a professor of conservation biology at Oxford University – not involved in the research - says the study could be applied to populations other than giant pandas.

“Most large carnivores live in increasingly fragmented landscapes. It may well be that the messy nature of their interface with human endeavour induces more animals to disperse or travel further, and might result in greater genetic connectivity and enhanced population persistence,” he says. 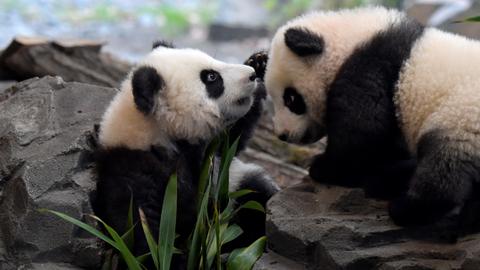 1
What’s at stake for the Global South: COP26 jargon explained
2
Introducing the next generation of the internet: the metaverse
3
Colombia says 42,600 hectares deforested in Amazon in first half of 2021
4
UN: Greenhouse gas levels reach new record high in 2020
5
US panel endorses Pfizer Covid vaccine for younger children