Australian researchers looked for the most repulsive colour to help save lives.

A group of experts from a marketing company have released the results of a survey which found that Pantone 448c, also known as opaque couché, is the ugliest colour in the world.

Officially the world's ugliest colour: Pantone 448 C (aka Opaque Couch) or as I like to call it Dark Green Brown. pic.twitter.com/C9PE17PjJe

The Australian Government had asked the research agency GfK Bluemoon to find the ugliest colour to use on cigarette boxes to encourage people to stop smoking.

Nearly a thousand smokers took part in the survey and chose the "drab, dark brown" colour, which they associated with "tar," "dirty" and "death."

After the survey Australia set out on December 1 to legislate that the colour must be used on plain packs of cigarettes alongside graphic health warnings.

The government hopes that the move will make people think twice about continuing the habit.

Australia was the first country to adopt plain packaging in 2012, and experienced a sharp fall in smoking immediately afterwards.

On May 31, in honour of World No Tobacco Day, the World Health Organisation (WHO) tried to encourage other countries to adopt similar plain packaging for tobacco products, following Australia's success.

The Guidelines for Implementation of Article 11 (Packaging and labelling of tobacco products) of the WHO Framework Convention on Tobacco Control (WHO FCTC) describes plain packaging as "measures to restrict or prohibit the use of logos, colours, brand images or promotional information on packaging other than brand names and product names displayed in a standard colour and font style [plain packaging]."

WHO Director-General Dr Margaret Chan said on No Tobacco Day "Plain packaging reduces the attractiveness of tobacco products. It kills the glamour, which is appropriate for a product that kills people."

"It restricts tobacco advertising and promotion. It limits misleading packaging and labelling. And it increases the effectiveness of health warnings."

However, the result of the survey has been disputed.

Famous painter Leonardo Da Vinci used opaque couché to encolour the dress of the subject of his famous painting "Mona Lisa," being inspired by popular clothing at that time in history.

So beauty is really in the eye of the beholder. 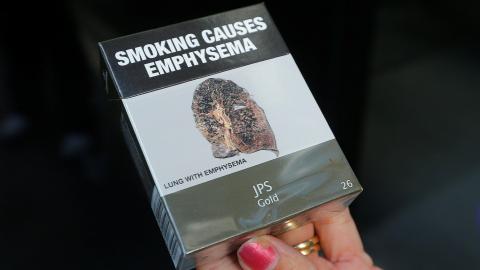