With more than 300 photographs and a new book, Sakir Eczacibasi is commemorated by the Istanbul Modern museum. He was “one of the prominent figures of his time" in Turkey’s arts and culture scene.

Istanbul Modern celebrates the photography of Sakir Eczacibasi (1929-2010) on the 10th anniversary of his passing with an exhibition showcasing more than 300 of his photographs. Titled “Sakir Eczacibasi: Selected Moments”, the exhibition opens to the public on November 25, 2020 and ends on March 31, 2021.

Eczacibasi, a pharmacist by trade - his last name means ‘head pharmacist’ -, took up photography in the 1960s. He considered art as “an effort to reproduce the world with a specific personal interpretation”.

He wasn’t only interested in photography, but in many other aspects of art: He was one of the founders of the Turkish Cinema Association (Turk Sinematek Dernegi), and its president for ten years, and became as the chairman of the Board of Directors of the Istanbul Foundation for Culture and Arts (IKSV) in 1993, holding that position until his death.

His official work was at the family company, serving in the 1970s as Eczacibasi Pharmaceuticals General Manager, becoming Eczacibasi Group CEO in 1980, and Eczacibasi Holding chairman of the board in 1993. He retired from business life in 1996.

The website of Istanbul Modern notes he was “one of the prominent figures of his time in Turkey’s culture and art world, [who] tried to convey ‘the relationship of his subjects with their surroundings, other people, vehicles and paths’ in his photographs.”

Oya Eczacibasi announced that the exhibition could be viewed both in person at the museum, and also online at istanbulmodern.org website. Noting that Sakir Eczacibasi was a contemporary photographer who was appreciated both locally and internationally, Oya Eczacibasi said “On the 10th anniversary of his passing, we would like to commemorate Sakir Eczacibasi, who has made innumerable contributions to the culture and art world, with moments that have shown up on his lens. We are happy to present to viewers the moments that Sakir Eczacibasi has selected, questioning the formality of photography, and reflecting the motion, uncertainty and changes present in everyday life.”

Eczacibasi Group CEO Atalay Gumrah noted that Sakir Ezcacibasi had explained his passion for photography by saying: “I photograph, because I want to visualise the moments I live, I want to remember my past with images. Not just to remember, but to share them with viewers.”

Gumrah said in tandem with the exhibition, the book ‘Selected Moments’, the last book that Sakir Eczacibasi had completed preparations for before his death, would be unearthed thanks to the efforts of Dr. Nejat F. Eczacibasi Foundation after 10 years.

Gumrah also announced that the website that was long in coming, with Sakir Eczacibasi’s passion for art, biography and samples of his photography in detail, is now live at sakireczacibasi.com

The curator of the exhibition Bulent Erkmen, a renowned graphic artist in his own right, could not join the Zoom conference but said in a statement: “Sakir Eczacibasi approached things he wanted to do, his interests, his curiosities, life and photography with relish, with passion. He photographed every thing he looked at, he saw, every moment. 50, 100, 150 photographs are not sufficient to tell his world of photography, booming like his voice. The exhibition aims to tell of the multifaceted passion behind Eczacibasi’s restless, lively camera.”

Istanbul Modern Photography Department Director Demet Yildiz said that the exhibition consisted of a section that was reserved for images projected on walls. The images would change every few minutes, as well as printed photographs and a voiceover by the photographer himself, collected from interviews he gave over the years.

The Istanbul Modern museum is open Tuesdays to Fridays from 11 am to 5 pm while on weekends it is open from 12 noon to 17 pm. Due to coronavirus precautions only 70 people can be admitted inside the museum at any given time, and reservations are recommended. 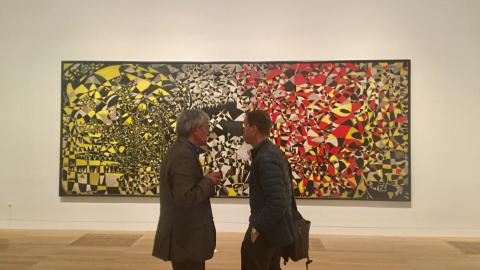