The Omani village which gets 3.5 hours of sunlight a day

Rumours that residents in remote village in Oman only have to fast 3.5 hours a day this Ramadan excite other Muslims in the country who have to endure 15 hours of fasting in 40C temperatures.

This week Muslims all over the world began fasting for the holy month of Ramadan. According to Islamic teachings, Muslims who are healthy enough to do so are required to abstain from eating and drinking from the onset of dawn till sunset.

As fasting times are dependent on the position of the sun, the length of time a Muslim spends fasting depends on his or her location. In the far north, such as countries like Norway and Finland, Muslims are fasting up to 21 hours a day, but in places like southern Chile and New Zealand fasting lasts around nine hours.

Due to the fact that the Islamic calendar is based on a lunar system, which consists of 12 months that are 29-30 days each, the Islamic year is approximately 10 days shorter than the commonly used Gregorian year. Therefore, Ramadan moves forward by around 10 days every year.

While Muslims in the southern hemisphere are enjoying an easier Ramadan this year in comparison to their northern counterparts, Ramadan is now beginning to gradually move into the winter months, meaning that within a matter of years it will be Muslims in the north who will be fasting just a few hours a day.

But for Muslims closer to the equator, where daylight hours and temperatures are more stable throughout the year, this makes very little difference.

However, Muslims in the Sultanate of Oman, a relatively quiet and peaceful country in the southeast of the Arabian Peninsula, were briefly overjoyed this week when news went viral of a remote mountain village where the residents only have to fast for three and a half hours a day.

Located around 150 kilometres west of the capital Muscat, the village of Wekan is situated at an altitude of 2,000 metres above sea level.

Famous for its apricots, grapes and pomegranates, the village is surrounded by cute, picturesque gardens and is popular with hikers who appreciate the untouched, natural beauty of Oman's Green Mountains.

The village is largely overshadowed by mountains, leaving it with access to direct sunlight only between 11:00am and 2:30pm every day.

This has led commentators to speculate that people in Wekan only have to fast for three and a half hours, perhaps in a quest to find a loophole that would allow them to escape fasting for 15 hours a day in 40C temperatures.

The rumours were quickly dispelled by Oman's tourism ministry, while the country's Ministry of Endowments and Religious Affairs dismissed the claims as an incorrect interpretation of fasting rules.

"Even if it is difficult to see the sun in some mountainous areas, it doesn't mean that the sun has not risen," an official from the ministry told the Times of Oman. 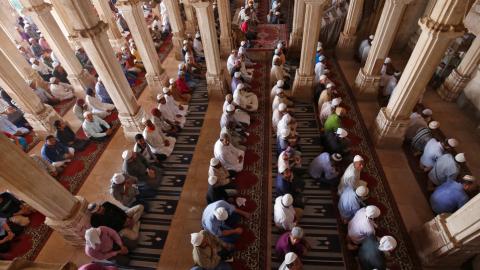 Effects of fasting on human body in Ramadan 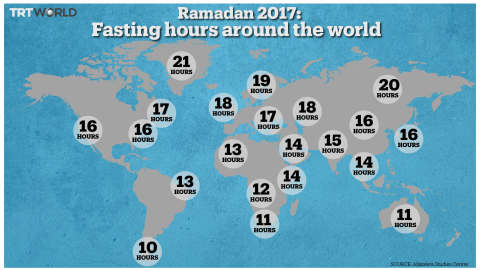 Six things to know about the sacred month of Ramadan