The global coronavirus pandemic has affected more than 5.4 million people, with over 344,000 deaths, according to a tracker. Here are coronavirus-related updates for May 24:

Turkey confirmed nearly 120,000 recoveries as the country began easing measures against the pandemic, according to the Health Ministry.

Some 1,141 new cases were reported in the country, bringing the total to 156,827, said Health Minister Fahrettin Koca on Twitter.

Recoveries from the disease hit 118,694 as 1,092 more patients were discharged from hospitals over the past day, Koca added.

The death toll from the outbreak rose to 4,340 as the country reported 32 new fatalities in the last 24 hours, according to ministry data.

Italy recorded 50 new deaths from the pandemic against 119 the day before, the Civil Protection Agency said.

However, it added that the data did not include deaths from the worst affected Lombardy region due to technical problems.

The daily tally of new cases declined to 531 from 669 on Saturday.

The total death toll since the outbreak came to light on Feb. 21 now stands at 32,785, the agency said, the third highest in the world after those of the United States and Britain.

The number of confirmed new coronavirus infections in France increased by 115, or 0.1 percent, to144,921 on Sunday, the lowest daily increase since the country went into lockdown on March 17, the health ministry said in a statement.

But the number of patients in hospital with Covid-19 increased slightly by seven to 17,185 after falling every day without interruption since April 15.

The United Kingdom's death toll from confirmed cases of Covid-19 rose by 118 to 36,793, Prime Minister Boris Johnson said on Sunday.

He also announced that primary schools in England are to reopen to some pupils from June 1.

Only reception pupils aged 4-5 in the first year of school, those aged 5-6 in year one, and those aged 10-11 in their final primary year will return initially, he told a news conference.

Canada on Sunday reported 103 new Covid-19 deaths and 1,189 infections in past 24 hours, taking the overall tally to 6,380 fatalities and 84,081 cases, according to the country's public health agency.

Spain's overnight coronavirus death toll rose by 70 on Sunday to a total of 28,752, the health ministry said.

Iran confirmed 58 more fatalities over the past 24 hours, bringing the nationwide death toll to 7,417.

A further 2,180 people tested positive for the pandemic, raising the overall count to 135,701, said the Health Ministry spokesman Kianoush Jahanpour.

He said 105,801 patients have recovered and been discharged from hospitals so far, while 2,615 patients remain in critical condition.

Lufthansa to resume flights from mid-June

Lufthansa, which is in talks with the German government over a $9.8 billion bailout, will resume flights to 20 destinations from mid-June, including some holiday hot-spots, a spokeswoman said.

The destinations include Mallorca, Crete, Rhodes, Faro, Venice, Ibiza and Malaga, the spokeswoman said, adding flights would depart from the airline's main hub in Frankfurt.

Further destinations will be unveiled at the end of next week, she said.

France wants its citizens to holiday at home

The French government does not want its citizens to travel abroad this summer and recommends they take their holidays in France, Environment Minister Elisabeth Borne said.

Earlier this month, President Emmanuel Macron said it was unlikely that French people would be able to undertake major foreign trips this summer and that even trips within Europe may have to be limited to reduce the risk of a resurgence of the coronavirus epidemic.

"Tuba Ahsan, a Turkish citizen, her Bangladeshi husband Mossaddique Ahsan and their three-year-old twins Huma and Ziyad were evacuated in an air ambulance," a statement by the Turkish Embassy in Dhaka read.

The air ambulance was arranged by Turkey's Ministry of Health.

Russia has reported its highest one-day coronavirus death toll but also the lowest number of new infections in three weeks.

The national coronavirus task force said that 3,541 people have died from the virus, an increase of 153. The previous high was 150.

The number of new infection cases was 8,599. Daily infection tallies of more than 11,000 were reported for several days in May. Overall, Russia has recorded 344,481 infection cases.

China says WHO chief has done a good job

Foreign Minister Wang Yi said Washington had been infected by a "political virus" compelling figures there to continually attack China, but offered an olive branch by saying the country would be open to an international effort to find the coronavirus source.

"It has come to our attention that some political forces in the US are taking China-US relations hostage and pushing our two countries to the brink of a new Cold War," he told reporters during a press conference at China's week-long annual parliament session.

The number of fatalities remained unchanged at 115, it said.

Three large Indian states have sought to delay the planned opening of their airports on Monday as new cases of the novel coronavirus jumped by a record, complicating the federal government's plan to resume flights after a two-month lockdown.

India registered 6,767 new cases of the novel coronavirus, the country's biggest 24 hour jump yet, taking the total to over 131,000.

Airlines are preparing to resume about a third of their domestic flight operations from Monday, even without clarity over which states will allow flights or what quarantine rules may apply to passengers.

Lawmakers from Britain’s governing Conservative party are joining opposition calls for Prime Minister Boris Johnson’s top aide to quit for travelling 400 kilometres (250 miles) to his parents’ home during a nationwide lockdown while he was coming down with the coronavirus.

The government has defended Dominic Cummings after the revelation that he had driven from London to Durham, northeast England, with his wife and son at the end of March.

A lockdown that began March 23 stipulated that people should remain at their primary residence, leaving only for essential local errands and exercise.

The government said Cummings made the trip because he wanted to ensure his 4-year-old son was looked after while he and his wife were ill.

But critics of the government expressed outrage that Cummings had broken stringent rules saying people should “Stay Home ... Save Lives.”

Thailand reports no new cases for fourth time this month

Thailand reported no new coronavirus cases and no new deaths, maintaining the total to 3,040 confirmed cases and 56 fatalities since the outbreak began in January.

Sunday was the fourth day in this month that there were no new daily cases, said Panprapa Yongtrakul, a spokeswoman for the government's coronavirus task force.

There are 2,921 patients who have recovered and returned home since the outbreak started.

A 107-year-old Iranian woman who was infected with the new coronavirus has recovered, Iran's semi-official Fars news agency reported.

The woman, Saltanat Akbari, was admitted to the Khansari hospital in the central city of Arak. She was released from the hospital after spending "some time" in isolation.

"She defeated the virus with the help of doctors and nurses at the hospital," Fars said.

Iran is one of the most affected countries in the Middle East with a total of 133,521 infected cases and 7,359 deaths.

The number of confirmed coronavirus cases in Germany increased by 431 to 178,281, data from the Robert Koch Institute (RKI) for infectious diseases showed.

Mexican health authorities registered 3,329 new cases of the novel coronavirus in the country and 190 new deaths, a health official said on Saturday, bringing the total number to 65,856 cases and 7,179 deaths.

Argentina extended a mandatory lockdown for the capital, Buenos Aires, until June 7, President Alberto Fernandez announced on Saturday, after the city saw a steady increase of coronavirus cases in recent days.

Argentina's lockdown, which was due to expire on Sunday, has been in place since March 20, though officials relaxed restrictions in some areas of the country.

The country now has 347,398 confirmed cases, according to the ministry, up 16,508 from Friday, when it surpassed Russia to become the world's virus hot spot behind the United States.

The actual number of cases and deaths is believed to be higher than the official figures disclosed by the government, as the testing capacity of Latin America's largest country still lags.

Two people from two Premier League clubs have tested positive for the coronavirus after a second batch of testing, the Premier League said on Saturday.

Since the players returned to limited group training on Tuesday, eight positive tests for the virus have been confirmed from England's top-flight clubs.

The University of Oxford's Covid-19 vaccine trial has only a 50% chance of success as the coronavirus seems to be fading rapidly in Britain, the professor co-leading the development of the vaccine told TheTelegraph newspaper.

Adrian Hill, director of Oxford's Jenner Institute, which has teamed up with drugmaker AstraZeneca Plc to develop the vaccine, said that an upcoming trial, involving 10,000 volunteers, threatened to return "no result" due to low transmission of Covid-19 in the community.

"It's a race against the virus disappearing, and against time", Hill told the British newspaper. "At the moment, there's a 50% chance that we get no result at all."

Spain said on Saturday it would let in foreign tourists and restart top league football in the coming weeks, accelerating Europe's exit from strict coronavirus lockdowns, even as the disease continued its deadly surge in parts of South America.

Government officials in the Democratic Republic of Congo have denied any manipulation of its figures for coronavirus cases and deaths.

The controversy came as health officials announced DRC's latest Covid-19 figures which stand at 63 deaths from 2,025 cases, most of them in the capital, Kinshasa. So far, 312 people have recovered.

Turkey has to adapt to new normal: spokesperson

The normalisation process will not be about abandoning measures all together but we have to adapt to the new normal, Turkey's presidential spokesperson said Saturday.

"We need to get used to living with masks. Turkey will go down to history when this coronavirus pandemic is over and it is written down," Ibrahim Kalin said on local television station NTV.

Turkey wants to open for the tourism season as soon as possible, Kalin said. "We cannot allow anything negative affecting our positive image during the pandemic. Tourists will be tested before boarding the plane on their way to Turkey."

Trump hits the golf course as US kicks off summer season

President Donald Trump kicked off the start of the American summer season on Saturday with his first golf outing in two months, underlining his push for a return to normal life in the United States.

As lockdowns ease across the country and the US leader ramps up his travels, Trump also confirmed he would attend a space launch in Florida next week.

Dozens of demonstrations were held across Germany on Saturday as part of a protest movement against coronavirus lockdown measures which is gaining momentum.

The rallies have been held weekly since the start of April, swelling in recent weeks to gatherings of thousands in major German cities.

The movement sees the government restrictions to curb the spread of the virus as the beginning of an authoritarian regime or an illegal attack on individual freedoms.

UK PM Johnson to update the public on coronavirus

British Prime Minister Boris Johnson will next week update the public on the coronavirus crisis as his government launches its test-and-trace system in an attempt to prevent a second deadly spike of the outbreak when people return to work. 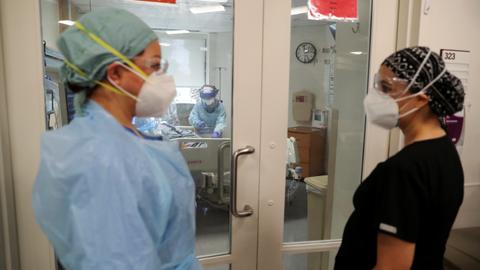