Covid-19 has killed more than 3.2 million people and infected over 157 million others globally. Here are all the coronavirus-related developments for May 7:

The World Health Organization has approved the Sinopharm Covid-19 vaccine for emergency use –– the first Chinese jab to receive the WHO's green light.

The UN health agency signed off on the two-dose vaccine, which is already being deployed in dozens of countries around the world.

The WHO has already given emergency use listing to the vaccines being made by Pfizer-BioNTech, Moderna, Johnson and Johnson, and the AstraZeneca jab being produced at separate sites in India and in South Korea.

"This afternoon, WHO gave emergency use listing to Sinopharm Beijing's Covid-19 vaccine, making it the sixth vaccine to receive WHO validation for safety, efficacy and quality," WHO chief Tedros Adhanom Ghebreyesus told a news conference.

"The Strategic Advisory Group of Experts on Immunisation, or SAGE, has also reviewed the available data, and recommends the vaccine for adults 18 years and older, with a two-dose schedule."

Downward trend in the number of daily cases in Turkey has continued as the country reported over 20,000 new coronavirus cases, according to Health Ministry data.

A total of 20,107 cases, including 2,210 symptomatic patients, were confirmed across the country, the data showed.

Turkey's overall case tally is over 4.99 million, while the nationwide death toll has reached 42,465, with 278 fatalities over the past day.

As many as 35,529 more patients in the country won the battle against the virus, bringing the total number of recoveries to over 4.66 million.

More than 48.9 million coronavirus tests have been done in Turkey to date, with 251,194 conducted since Thursday.

The latest figures show that the number of Covid-19 patients in critical condition dropped to 3,260.

Separate government data published in March suggested that real death toll may be at least 60 percent above the confirmed figure.

Italy has reported 207 coronavirus-related deaths against 258 the day before, the Health Ministry has said, while the daily tally of new infections fell to 10,554 from 11,807.

Italy has registered 122,470 deaths linked to Covid-19 since its outbreak emerged in February last year, the second-highest toll in Europe after Britain and the seventh-highest in the world. The country has reported 4.09 million cases to date.

There were 109 new admissions to intensive care units, down from 127 on Thursday. The total number of intensive care patients fell slightly to 2,253 from a previous 2,308.

Health workers and authorities in Nepal have struggled to contain a massive surge of Covid-19 cases as infections spill over from neighbouring India's deadly second wave.

In the last three weeks, Nepal's daily case trajectory has shot up with two out of five people tested now returning positive.

More than 3,500 people have died since the pandemic began, 400 of them in the last two weeks alone, according to official figures.

Two-thirds of adults in the United Kingdom have been vaccinated with a first dose of a Covid-19 shot, official data has showed.

Russia has authorised the one-shot Sputnik Light version of its Covid-19 vaccine for use, the Russian Direct Investment Fund (RDIF) has said, a move that could help vaccine supplies go further in countries with high infection rates.

Developed by Moscow's Gamaleya Institute, the slimmed-down vaccine, which the RDIF said is 79.4 percent effective against Covid-19 and costs under $10 a dose, has been earmarked for export and could increase the number of people with partial immunity.

One of its main potential uses is as a vaccine that can be shipped to a country in the grip of an acute outbreak which needs to be subdued quickly.

"The single-dose Sputnik Light vaccine demonstrated 79.4 percent efficacy according to analysed data taken from 28 days after the injection was administered as part of Russia's mass vaccination programme between 5 December 2020 and 15 April 2021," the RDIF said in a statement.

A Phase III clinical trial involving 7,000 people was under way in Russia, the United Arab Emirates, Ghana and other countries, the RDIF said. Interim results are expected later this month.

According to authorities, around 8 million Russians have so far been fully inoculated with the flagship two-dose Sputnik V, named after the Soviet-era satellite that triggered the space race in a nod to the project's geopolitical importance for Moscow.

Russian scientists last month said Sputnik V was 97.6 percent effective against Covid-19 in a "real-world" assessment based on data from 3.8 million people.

India has reported another record daily rise in coronavirus cases, bringing total new cases for the week to 1.57 million, as the country's vaccination rate falls dramatically due to a lack of supplies and transport problems.

As India's deadly second wave of Covid-19 continues unabated and its total number of cases now stand at 21.49 million, with infections spreading from overcrowded cities to remote rural villages that are home to nearly 70 percent of the 1.3 billion population.

Medical experts say the real extent of the virus in India is five to 10 times the official tallies.

Across the border from a devastating surge in India, doctors in Nepal have warned of a major crisis as daily coronavirus cases hit a record and hospitals were running out of beds and oxygen.

Nepal reported 9,070 new confirmed cases on Thursday, compared to 298 a month ago. The number of fatalities also reached its highest with 58 on Wednesday and 54 on Thursday, for a total of 3,529.

“Right now there are no beds available today in any hospital that is treating Covid patients," said Dr. Jyotindra Sharma, chief of Hospital for Advanced Medicine & Surgery in Kathmandu.

“Even if any beds were made available, there is a huge scarcity of oxygen and we are not at the peak of this crisis."

Saudi to make vaccination compulsory for all workers

All public and private sector workers wishing to attend a workplace in Saudi Arabia will be required to have taken a Covid-19 vaccination, the human resources ministry has said, without specifying when this would be implemented.

"Receiving a coronavirus vaccine will be a mandatory condition for male and female workers to attend workplaces in all sectors (public, private, non-profit)," the Ministry of Human Resources and Social Development said on Twitter.

It urged workplaces to start preparations to ensure all employees receive a vaccination.

Tunisia will impose a lockdown for one week from Sunday, Prime Minister Hichem Mechichi has said, ahead of next week's Eid al Fitr holiday when families and friends traditionally gather.

Speaking at a news conference, Mechichi said measures were being taken in case "the health system will collapse, and this is a real danger".

Ghana has received 350,000 doses of the AstraZeneca coronavirus vaccine, which will enable it start offering second doses of the shot after it nearly ran out, the health ministry has said.

The West African country was the first to receive vaccines from the World Health Organisation-backed Covax global vaccine sharing scheme in February and kicked off its vaccination campaign in early March.

Unlike other countries where vaccine hesitancy and funding problems slowed delivery, Ghana has administered more than 900,000 doses, according to the health ministry, including the 600,000 doses it received from the Covax scheme, and others obtained through bilateral deals.

The 350,000 doses it received were part of a batch of 1.7 million doses the Covax scheme delivered to the Democratic Republic of Congo on March 2.

The European Medicines Agency has said it has begun an accelerated authorisation process for an experimental coronavirus treatment made by GlaxoSmithKline and Vir BioTechnology.

In a statement on Friday, the EU drug regulator said it had started a rolling review of sotrovimab, based on early results from an ongoing study into whether the treatment can prevent hospitalisation or death in people who don’t yet have severe Covid-19. But EMA said it had not yet received the complete data and cautioned that “it is too early to draw any conclusions about the benefit-risk balance of the medication.”

Although the EMA has given the green light to four vaccines, there are few licensed treatments for the coronavirus, especially any that might prevent people with mild Covid-19 from progressing to severe disease.

The Malaysia Open badminton tournament due to take place this month has been postponed because of a worsening coronavirus outbreak, organisers have said, leaving only one qualifying event for the Olympics.

The competition was scheduled for May 25-30 but will now happen on future dates which are not yet decided, the Badminton World Federation said.

Brazil has recorded 73,380 additional confirmed cases of the coronavirus in the past 24 hours, the Health Ministry has said, bringing the total number of confirmed cases in Latin America's largest country above the 15 million mark.

The ministry also said Brazil recorded 2,550 fatalities from Covid-19 in the last 24 hours, lifting the official death toll to 416,949.

Mexico's Health Ministry has reported 2,846 new confirmed coronavirus cases and 166 more deaths, bringing the total number of cases in the country to 2,358,831 and fatalities to 218,173.

Separate government data published in March suggested the real death toll may be at least 60 percent above the confirmed figure.

Japan seeking to extend state of emergency until May 31

The Japanese government will seek to extend the current state of emergency in Tokyo and three other areas until the end of May in an effort to curb a persistent spike in coronavirus cases, a cabinet minister has said.

The extension in Tokyo, Osaka, Kyoto, and Hyogo would last until May 31, Economy Minister Yasutoshi Nishimura said. He added that the prefectures of Fukuoka and Aichi would be added.

He was speaking at the start of a meeting with a panel of experts to discuss the proposed measures, expected to be formally approved later on Friday.

The extension would end fewer than two months before the Tokyo Olympics are set to open and would raise further questions about the Japanese capital's ability to host the Games.

Australia to reopen door to citizens stranded in India

Australian citizens stranded in Covid-ravaged India will be able to return home from May 15, has said Prime Minister Scott Morrison, as Sydney remains on high alert for a potential outbreak.

Morrison stood by his decision to impose a biosecurity order barring flights to and from India, a ban that was backed by potential prosecution and financial penalties.

The policy drew heavy criticism from lawmakers, expatriates, and the Indian diaspora, but Morrison said it had worked to slow the rate of Covid-19 infections in people quarantined in Australia.

The National Health Commission said in a statement all of the new cases were imported infections originating from overseas. The number of new asymptomatic cases, which China does not classify as confirmed cases, rose to 17 from 7 cases a day earlier.

The total number of confirmed Covid-19 cases in mainland China now stands at 90,739, while the death toll remained unchanged at 4,636. 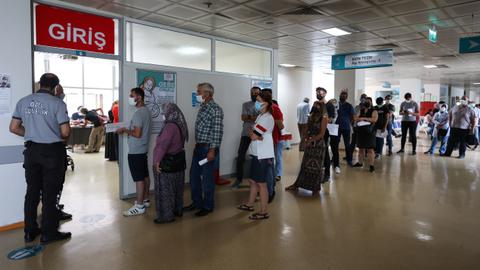 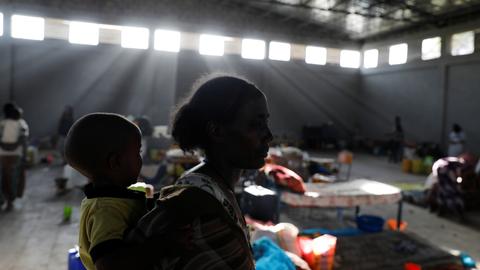 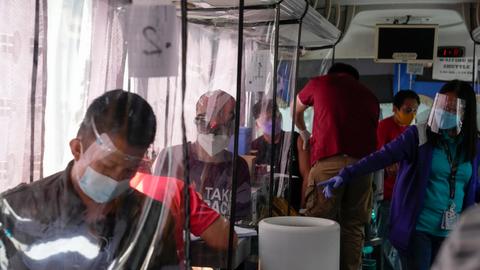