The total number of coronavirus cases around the world passed the seven million mark. Here are pandemic-related updates for June 8:

The World Health Organization (WHO) said that the Covid-19 pandemic situation was worsening around the globe, as it warned against complacency.

WHO said it had recorded on Sunday (June 7, 2020) its highest daily tally of new infections, with the virus raging in the Americas.

After East Asia, Europe became the epicentre of the disease, but has now been overtaken by the Americas.

"Although the situation in Europe is improving, globally it is worsening," WHO chief Tedros Adhanom Ghebreyesus told a virtual news conference in Geneva.

France's virus deaths were four times higher than a day earlier but the increase of new confirmed cases were at a one-week low.

In a statement, the health ministry said the country's death toll rose by 54, or 0.2 percent, to 29,209, the fifth-highest total in the world. On Sunday, 13 virus deaths were reported.

The number of confirmed cases rose by 0.1 percent to 154,188, which is lower than the rolling seven-day average of 0.2 percent.

Italy reports 65 deaths, 280 new cases
Deaths from the virus epidemic in Italy climbed by 65 against 53 the day before, the Civil Protection Agency said, while the daily tally of new cases rose to 280 from 197 on Sunday.

The total death toll since the outbreak came to light on February 21 now stands at 33,964, the agency said, the fourth highest in the world after those of the United States, Brazil, and Britain.

The number of confirmed cases amounts to 235,278, the seventh-highest global tally behind those of the United States, Russia, Brazil, Spain, Britain, and India.

People registered as currently carrying the illness fell to 34,730 from 35,262 the day before.

Turkey confirmed a banner 3,400 additional recoveries from the virus as the country continues easing measures against the pandemic, according to the health minister.

The total number of recoveries from the disease hit 141,380 as 3,411 more patients were discharged from hospitals over the past day, said Fahrettin Koca.

The country's death toll from the outbreak rose to 4,711 as Turkey reported 19 new fatalities over the last 24 hours.

Healthcare professionals did 39,361 tests for the virus in the past 24 hours, raising the total number to more than 2.3 million.

The World Bank said the world is facing an unprecedented health and economic crisis that has spread with astonishing speed and will result in the largest shock the global economy has witnessed in more than seven decades.

Millions of people are expected to be pushed into extreme poverty.

In an updated "Global Economic Prospects," the World Bank projected that global economic activity will shrink by 5.2 percent this year, the deepest recession since a 13.8 percent global contraction in 1945-46 at the end of World War II.

The 5.2 percent downturn this year will be the fourth worst global downturn over the past 150 years, exceeded only by the Great Depression of the 1930s and the periods after World War I and World War II when many the economies of many war-torn countries were devastated and the United States and other nations demobilized after massive defense buildups.

The number of virus deaths in Russia has risen to 5,971, the country's coronavirus response centre said after it reported 112 fatalities in the last 24 hours.

Pakistan has recorded more than 100,000 infections, officials statistics showed and the rise in daily infections has prompted authorities to begin strict enforcement of government safety measures.

The south Asian nation, which has registered 2,067 deaths and 103,671 infections of the novel coronavirus, lifted its lockdown last month but promulgated protocols for the reopening of markets, industries and public transport, including mandatory wearing of masks and social distancing.

India is reopening its restaurants, shopping malls and religious places in most states even as the number of cases and deaths in the country grows.

The Health Ministry reported another 9,983 cases Monday, raising India’s count past 256,000 to fifth-most in the world. The 206 fatalities reported were the highest single-day rise and takes the country’s death toll to 7,135.

There has also been a surge in infections in India’s vast countryside following the return of hundreds of thousands of migrant workers who left cities and towns after losing their jobs.

Indonesia’s capital partly reopened after two months of lockdown, as the world’s fourth most populous nation gradually reopens its economy.

Offices, restaurants and grocery stores reopened with only 50 percent of their employees and customers. Public transportation also resumed services.

On Friday, all worship facilities in the world’s most populous Muslim-majority country, including mosques, were allowed to reopen at half capacity and with social-distancing requirements in place.

Schools are remaining closed during this month’s transition phase to the so-called “new normal,” while some shopping centres, zoos and beaches will reopen next week.

The data shows 492 workers were diagnosed in May, marking a 219 percent increase from the 154 workers who had tested positive for the coronavirus the month before.

Children in South Africa began returning to classrooms as part of a gradual loosening of restrictions imposed under a months-long lockdown in the continent's most industrialised nation.

South Africa has counted nearly 50,000 cases of the new coronavirus, the most of any country in sub -Saharan Africa, along with almost 1,000 deaths.

Health Minister Jaime Manalich said some miscounting pointed out by the WHO in March and April was corrected, in addition to 96 new deaths.

Ninety-six marked a record-high number of deaths reported in a single day, according to Manalich.

Meanwhile, a record number of new infections in the last 24 hours, of 6,405, was also reported in Chile, totalling 134,150 infected since the pandemic began in the South American country on March 3.

The virus' spread has come despite a three-week lockdown in the crowded capital, Santiago.

Millions of jobs could be lost if planes stay grounded, Heathrow boss says

Hundreds of thousands of jobs, if not millions, could be lost in Britain if aviation is not able to resume quickly, the chief executive of London's Heathrow airport said.

Britain introduced a 14-day quarantine period for international arrivals on Monday despite warnings from its biggest airlines that the move will decimate domestic tourism and damage exports.

"We cannot go on like this as a country," Chief Executive John Holland-Kaye told Sky News. "We need to start planning to reopen our borders.

"If we don't get aviation moving again quickly, in a very safe way, then we are going to lose hundreds of thousands if not millions of jobs in the UK just at the time when we need to be rebuilding our economy."

New Zealand's Prime Minister Jacinda Ardern said that all measures in the country will be lifted from Tuesday, barring border closure restrictions, as the virus had been eliminated from the country.

The country would move to national alert level 1 from midnight on Monday, Ardern said in a news conference.

She said public and private events can go on without restrictions, retail and hospitality sectors can operate normally, and all public transport can resume.

Denmark lifts limit on public gatherings to 50 people from 10

Denmark lifted the limit on public gatherings to 50 people from 10 as it relaxes measures to curb the spread of the coronavirus, the ministry of health said.

The restrictions on public gatherings were put in place on March 17.

Honduras extends curfew by one week to June 14

Honduras has extended a curfew by one week through June 14 in order to contain the spread of the coronavirus pandemic, security ministry spokesman Jair Meza said.

Meza made the announcement on national television even as the Central American country is about to begin the gradual re-opening of its economy on Monday.

Thailand confirmed seven new coronavirus infections and no new deaths, with the new cases found in quarantine, taking the country to two weeks without local transmission.

Thailand has reported 77 cases in the past 14 days and all were contained after being imported from overseas, said Taweesin Wisanuyothin, a spokesman for the government's Centre for Covid-19 Situation Administration.

The total number of confirmed cases stands at 3,119, with 58 deaths.

Cuban President Miguel Diaz-Canel has declared the coronavirus pandemic "under control" after the island nation registered an eighth straight day without a death from Covid-19.

It paves the way for an announcement next week on Cuba's strategy to gradually lift its lockdown.

With 1,862 people having recovered, Cuba has only 244 active cases.

Brazil registered 37,312 total virus deaths while overall cases in the country reached 685,427, according to data from the health ministry on Sunday, amid criticism of the government's handling of the pandemic.

The government changed its format for reporting virus statistics for the second straight day.

The coronavirus pandemic killed 691 people in the United States over the past 24 hours, the lowest number in a week, figures from Johns Hopkins University showed.

Both the number of cases and the death toll are by far the highest in the world.

Mexico's health ministry reported 3,484 new confirmed cases of virus infections and 188 additional fatalities, bringing the total in the country to 117,103 cases and 13,699 deaths.

The government has said the real number of infected people is significantly higher than the confirmed cases.

Confirmed cases of virus infection in Panama reached 16,425, up 421 from the previous day, and deaths climbed by seven to 393, the health ministry said.

Poland saw a record spike in virus cases over the weekend, with most of the hundreds of infections reported by the health ministry linked to a coal mine in the country's south.

The 1,151 new cases, 576 of them registered Saturday and 575 on Sunday, marked the EU country's highest consecutive two-day total thus far.

Nearly two-thirds of those newly infected in Poland, which depends on coal to generate some 80 percent of its power, are employees of the Zofiowka mine and their family members, according to the health ministry. 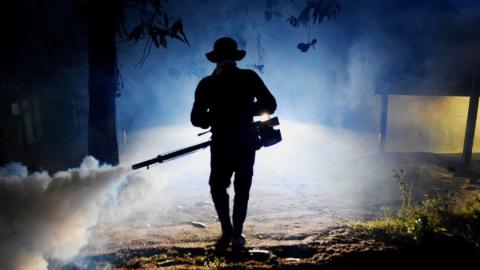