A Kenyan social activist and photographer hopes to bring his anti-corruption crusade to Kenya's parliament. Here's the story of Boniface Mwangi

Boniface Mwangi is a famous youth leader in Kenya. He happens be a famous photojournalist, too. Armed with his camera, the 33-year-old has strived to expose social inequality and endemic political corruption. Featured in TIME Magazine's "Next Generation Leaders" list in 2015, Mwangi has now decided to launch a bid to take his fight to the country's parliament.

The parliamentary and presidential elections in Kenya are slated for early August, and young Mwangi will campaign for the Stahere Constituency in the capital city of Nairobi.

Many other young Kenyans have decided to fight the electoral battle, too. They believe the country's political establishment, which has been mired in corruption and largely dominated by older politicians, needs to be reinvented by young, untainted leaders. They share common idealistic views and come from various fields, such as journalism, law and academia. They are trying to cultivate support from the country's youthful population — 60 percent of the population is under the age of 25.

On Transparency International's index of corruption perceptions, Kenya ranked 145th last year, alongside Gambia, Nicaragua and Madagascar. The social and economic inequalities are widespread with 44 million Kenyans living below the poverty line, according to the United Nations.

The brazen crookedness in the government and the extraordinary suffering of people is fuelling the youth outrage nationwide. Mwangi's activism is but one way in which that anger is being expressed.

Mwangi has a personal story of hardship caused by corrupt state officials. At 15, he was expelled from a correctional high school for exposing unprofessional practices among the teaching staff.

He asked his mother to send him a camera to gather evidence. He then secretly took photos of teachers mistreating and abusing children in one such correctional school. He then dispatched a set of pictures to Shariff Nassir, who was then Minister of Home Affairs, with an attached letter explaining how toxic the country's correctional schools were for disadvantaged children. The move backfired: Mwangi was expelled from the school.

"The ministry never responded. That was the end of my high school education," Mwangi wrote in his book Unbounded, which was published in October 2016.

Mwangi did not stop there, however. The expulsion strengthened his resolve to continue fighting against social injustice. Instead of a formal education, he is self-taught.

While Mwangi was focused on improving his life through self-directed study, he faced a personal loss. His mother died of liver cancer when he was just 17. The tragedy left Mwangi emotionally vulnerable.

"That day, I was forced to become an adult. I had a penchant for picking fights, especially when I believed I was right," he said. "My mother's death changed all that. I had to stay away from trouble."

Mwangi began to sell used books on the streets of Nairobi. After work, he would grab the camera his mother had gifted him, and hit the poor corners of Nairobi.

His works reflect the life in Nairobi's biggest dumpsite, and places the homeless people in the right social context. His pictures also exposed the police brutality, land grabs and the awful prison conditions.

The body of his work embodies everything from economic inequality to corruption to human rights abuse.

Mwangi gradually transitioned from a bookseller to professional photographer, as he began his career at The Standard, one of Kenya's leading newspapers, in 2007. He found himself covering the disputed presidential election that ended up triggering tribal violence.

The country had completely ignored the historic tribal divisions between ethnic groups created by the "divide and rule" policy of the British Empire. The violence shook Kenyan society, as the divisions stared at them like a freshly gaping wound.

Nearly 1,400 people were slaughtered in ethnic clashes, while 600,000 people were displaced. Mwangi captured many of the most significant moments of the violence.

The experience left Mwangi disgruntled after seeing the way politicians responded to the violence. "Two months later [after the riots], two politicians came together, they had a cup of tea. They just signed a peace agreement and the country moved on," he said at the Ted Talk.

"I was a very disturbed man because I saw the violence firsthand," he continued. "I saw the killings, the displacement. I met women who had been raped, and it disturbed me, but the country never spoke about it. We pretended. We all became smart cowards. We decided to stay out of trouble and not talk about it."

Mwangi quit his job at The Standard because he "could not stand [the injustice] anymore," he said.

He organised street exhibitions across Kenya, displaying the imagery of nationwide violence. His goal was to initiate a dialogue for peace and reconciliation.

He also launched the "PAWA254" project with other artists to trigger a conversation about social and economic inequalities across the country.

His photographic skills have been widely appreciated; even Barack Obama and Hillary Clinton are familiar with his work. Obama said he was "struck" by Mwangi's personal story, and Clinton said his "photography tells an important and powerful story for the world to hear."

He likes to protest in creative ways. In the spring of 2013, he and his fellow activists shepherded pigs to the front gate of parliament, and fed them with the blood of dead pigs. It was a protest against lawmakers, who were trying to increase their own salaries at the cost of national exchequer. Mwangi wanted to highlight their greed by using the blood-drinking pigs to symbolise the lawmakers.

The country is currently grappling with a range of issues: attacks by the Al Qaeda-linked armed group Al Shabab; agitations held by teachers and nurses; failing banks; and pervasive deep-rooted corruption in state institutions.

Although approval ratings for the current President Uhuru Kenyatta are largely favourable, the opposition leaders are largely focusing their campaigns against him on the country's economic troubles.

Last year, Philip Kinisu, the national anti-graft commissioner, said that Kenya was losing a third of its state budget — about $6 billion — to corruption annually. About $55 million of that has allegedly been embezzled at the Ministry of Health and another $7.6 million have been siphoned off at the national youth service.

Mwangi is playing an instrumental role in highlighting these frauds. It's not an easy task, though. He's been facing constant threats to his life and family for over three years. In January, he wrote a long Facebook post, explaining how "anguished" he feels and how dangerous it is to be an anti-corruption crusader in Kenya.

"There are a myriad of challenges to anti-corruption activists," Kimeu said. "They range from concerns for personal safety and that of family … [to] harassment using the legal system and vilification by politicians."

Yet activists like Mwangi are playing a vital role.

"Since corruption is driven by political and economic elite who also control the instruments of law enforcement," Kimeu argued. "The role of objective civil society and anti-corruption experts is to make sure that matters are not swept under the carpet and that the high and the mighty are held accountable."

He, however, ended his post on a brave note: "This struggle is not in vain. Hate, abuse, and threats won't stop this righteous fight to reclaim Kenya." 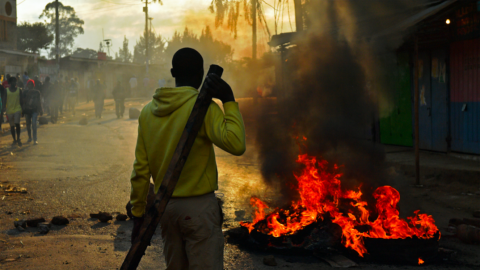 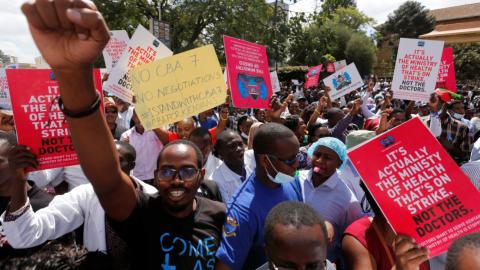 Why have Kenya's doctors been on strike for three months?