Imprisoned in the notorious Tora prison, Yasser Albaz's family says he might be suffering from the coronavirus.

The family of a Canadian citizen arbitrarily held in Egypt’s infamous Tora prison for more than a year, fear that he’s now suffering from the potentially deadly coronavirus.

Yasser Albaz, 52, a businessman, was detained in Cairo in February 2019, but never formally charged. He’s an Egyptian who moved his family to Canada about 20 years ago but frequently travelled to his native land.

His daughter, Amal Albaz, has mounted an international effort in order to bring attention to his plight. She has given multiple interviews, and has kept up the pressure on various Canadian officials in the hope she may secure her father’s release.

“We have been told that another prisoner has died in my father’s wing from Covid-19 and that some guards were infected and spread it in the prison from our source,” Amal told TRT World.

“He is held in a cell with so many inmates and one shared toilet. It has been very difficult for him”.

Egypt’s Tora prison is known for its inhumane conditions. The torture of detainees occurs frequently there and is now a well-documented crime, according to the Human Rights Watch.

The prison was once again in the news last month when 24-year-old filmmaker, Shady Habash, died there. Habash's crime was that he had directed a music video for a song that was critical of Sisi.

“For some days now, Yasser has been experiencing symptoms of coronavirus. Information received by the family confirms he is suffering from severe cough, extreme fatigue, tightness in his chest and difficulty breathing,” his family said in a statement.

The Egyptian government is accused of arbitrarily arresting thousands of political and civil rights activists on fabricated charges.

While American and European lawmakers have voiced concerns over human rights violations, their governments continue to back Sisi, a former military commander who came to power in a coup in 2013.

The Egyptian military has used brutal force to stifle any sort of dissent - often with the indirect backing of its western allies.

Whether it is the $15 billion arms deal that was signed with France in 2018, the promise to keep the refugees away from the European borders or working with Italy’s ENI on the gas field in the eastern Mediterranean, Sisi has found ways to avoid criticism.

This is despite the public pressure within Europe to take Sisi to task over human rights violations.

More recently, hundreds of people have protested in Italy for the release of Patrick Zaki, 27, a student of the University of Bologna and activist of an Egyptian NGO.

Zaki was arrested earlier this year, and despite demonstrations, he continues to remain in prison. His supporters fear that he may suffer the same fate as Giulio Regeni, an Italian student who was abducted in Cairo in 2016 and later killed - his murder blamed on the security forces.

At the same time, the Italian government is looking to sell frigates and warplanes to Egypt in a multibillion dollar deal.

“The alarmist political narrative (of migration) that has spread through the EU member states in recent years - especially those bordering the Mediterranean - has increased citizens' concerns about the issue exponentially,” Pier Antonio Panzeri, an Italian politician and the then-member of the European Parliament, told TRT World at the time.

“For this reason, many countries have preferred to close their eyes to the human rights situation, provided that Egypt takes responsibility for migrants from other African countries, thus acting as a barrier.

By carrying out a ruthless military operation against militants in the Sinai Peninsula, Cairo’s establishment has tried to convince the world that it's hard on terrorism.

For people like Yasser Albaz who have lingered on in an Egyptian prison for months, the best hope is for foreign governments to keep up the pressure on Cairo to do the right thing and release detainees. 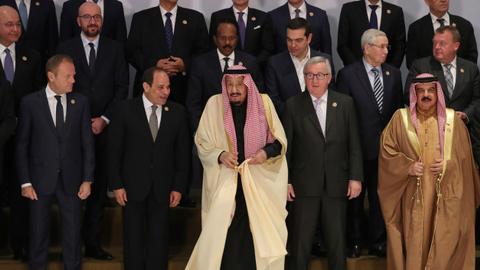 Egypt’s Sisi says his country does not qualify for ‘prosperity’