A glimpse of Homs' lost cultural heritage in an Istanbul gallery

1
For many, democracy is not delivering, global survey finds
2
Sudanese women are back to the frontlines of resistance
3
BRICS 20 years on: A success or failure?
4
A brief history of Olympic boycotts
5
Croatian president condemned for downplaying Srebrenica genocide

Since 2011, Homs has become famous around the globe as a symbol of the Syrian uprising. The "Echoes of Homs" exhibition offers a chance to see the city in a very different light, through the eyes of its once-thriving artistic community.

ISTANBUL, Turkey — In a cobblestone street in Tophane, an old neighbourhood in Istanbul on the European side down the hill from Galata, there's a former tobacco warehouse that's been converted into an artspace: Depo. Its display area is modestly sized, but its aspirations are anything but.

Between July 8 and August 6, Depo is host to Echoes of Homs, an exhibition focused on the stoic Syrian city: its past, present, and uncertain future. The title of the exhibition clues the viewer in that Homs is no longer the intact, vibrant city it once was before the Syrian conflict – but it's represented here through the works of artists who carry a piece of it with them, regardless of where they are now.

Homs has become famous as the Syrian city whose inhabitants have been the most dedicated in their opposition to the Assad regime, even when faced with starvation and bombardment. This exhibition explores a different, deeper, and more nuanced side of the city than the ubiquitous images of destroyed buildings and fighting.

Curator Nashwa Hamdoun, a Syrian native who now lives in Turkey, tells TRT World that Echoes of Homs is "a cultural project that aims to introduce ourselves correctly, who we are, what our heritage is, what the past we lost is."

"I don't know if we indeed lost it or whether we'll be able to revive it from the beginning," she adds.

The exhibition displays the talents of many artists, most of whom are from Homs. Some have lost their artworks to thieves and vandals; others, more grimly, have lost family members to the war. But the message of the exhibition is not one of despair, but of hope.

Hamdoun notes the language barrier in Turkey between Syrians and Turks, and how art can help overcome this obstacle. "I see the art as a global language which you can communicate with anyone in anywhere in the world," she says. "The same goes for heritage and traditions."

Since the beginning of the Syrian conflict, Turkey has welcomed more than three million refugees from its neighbour, setting up camps, issuing residency permits and providing a home for Syrians escaping the destruction in their homeland. While Turkey is dedicated to remaining a key refuge for the displaced millions, the cost of hosting and the difficulties in integrating the new population has strained relations between some Turkish citizens and the Syrian refugees.

Hamdoun's timely message of communication and integration through art's unifying power is reflected in the labels in the exhibition. They are printed in Turkish and Arabic, hinting at the targeted audience of the show.

Adnan Al Ahmad is the owner of Kaleemat Gallery in Istanbul's seaside neighbourhood of Kuzguncuk, on the Asian side. His gallery has loaned several artworks to the Echoes of Homs exhibition.

Speaking on the depiction of war in art, Ahmad refers to one of the best known works in art history, Picasso's Guernica. Painted in greys and blacks, the large-scale work is a scathing indictment of war with its abstract, violent and dramatic structure.

The Echoes of Homs exhibition is full of works more eloquent than war, so viewers shouldn't expect to see dark works overshadowed by death and destruction. Depo showcases various works, abstract and figurative, that display the range of Syrian artists in the show. Most are paintings, with the exception of one video, and a series of photographs taken in several neighbourhoods in Homs.

Hamdoun says the civilians who took the photos risked their lives to document the city. "Their weapon was the camera," she says. "These people wanted to contribute in this gallery and to send their pictures to be with us to talk about a part of our life that we cannot deny which is the revolution."

Hamdoun points out Homs is a very important city in terms of culture, heritage and art. "It's a very open city," she says, explaining "you can see variety in it, you feel like it's coloured." She points out that different faiths have lived side-by-side in the city, be it Muslim, Christian or Jew. There might be a touch of exaggeration when she says "This variety can be found in no other place in the world," but she clearly believes it.

"We really need to show it," Hamdoun says, referring to the special heritage and art of the city that still resonates deeply with this woman who has had to leave it behind, perhaps only temporarily.

Echoes of Homs succeeds in holding up a mirror to a city that once was a bustling hub, reminding viewers that Homs is so much more than the ruins it has been reduced to. 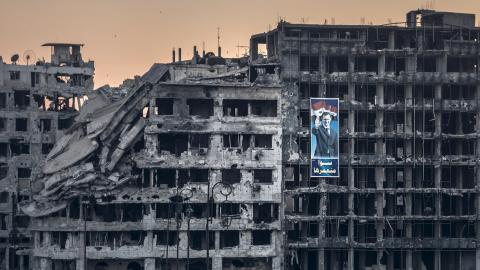 A Lens on Syria: Russian photojournalist gets solo show in London

BRICS 20 years on: A success or failure?

1
For many, democracy is not delivering, global survey finds
2
Sudanese women are back to the frontlines of resistance
3
BRICS 20 years on: A success or failure?
4
A brief history of Olympic boycotts
5
Croatian president condemned for downplaying Srebrenica genocide