In a bid to continue stoking anti-immigrant views at home, white supremacists throughout Europe have made Greece the frontline in their activism.

Far-right groups are increasingly converging on the Greek island of Lesbos seeking to capitalise on the high numbers of migrants present to create a new front in Europe’s periphery.

United primarily by their anti-migration and anti-Islam worldviews, a white nationalist group known as the Identitarian Movement is using the small Greek island adjacent to Turkey to pitch themselves as "Soldiers of the Cross holding the line" against would-be invaders.

Its members are mainly from France, Austria, Netherlands, the UK and Greece - and pictures and videos on social media show the disparate groups attempting to stoke violence on the island.

Devastating images of the One Happy Family community centre on fire in Lesbos. This is a place of hope and solidarity - a community centre where people could come and escape from the misery of the camp.

This has to stop.

The island of Lesbos has become a centre of the refugee crisis in Europe and one of the main entry points into the EU. The largest refugee camp on the island in Moria was initially designed to hold 3,000 but now contains more than 19,000 people, many who live in squalid conditions.

Greek locals earlier this year beat up members of the supremacist Identitarian Movement from Germany and Austria for attempting to sow division and take advantage of tensions in Lesbos. That, however, hasn't stopped them from coming or even using the island for political gains.

Lesbos as a rallying call

Oliver Flesch, a far-right German blogger, was spotted in early March this year at a refugee camp in Lesbos.

On his YouTube channel, the German courier, he appears to assume the role of an impartial journalist speaking truth to power, and to his over 56,000 subscribers.

In one such video, Flesch is seen interviewing refugees who are stuck on Lesbos.

The video, far from informing viewers of the plight of the inhabitants of the camps, many of whom have escaped active war zones and now live in unsanitary conditions, instead portrays them as a horde attempting to get into Europe, in particular Germany.

Flesch can be seen goading migrants to say they are coming to Germany for money, even as they list their severe living conditions.

Around the same time that Flesch was in Lesbos, there were several incidents where far-right activists got into street fights with people protesting their presence, and Flesch was reportedly amongst the activists.

Flesch has been named as part of an ecosystem that feeds into the Identitarian Movement’s broader media campaign.

One of the main leaders of the Identitarian Movement, Martin Sellner, was seen in Lesbos with a band of loyal followers, posing with the movement's flag.

Sellner, an Austrian, argued that they were there to help Greeks "defend their border".

Greek authorities later kicked the group out, but not before the stunt was picked up by Austrian and German media, ensuring that public attention was once again diverted towards migration.

The group in the past has raised money to hire a boat so that it may be used to disrupt ships attempting to rescue refugees in the Meditteranean.

Lesbos as a rallying call for far-right politicians

It's not just activists that are making the pilgrimage to Lesbos.

Swedish far-right politician and leader of the country’s third-largest party, Jimmie Akesson went to the island to hand out leaflets with the message that "Sweden is full. Don't come to us".

Similarly, two French politicians and members of the country’s far-right National Rally party Jordan Bardella and Jerome Riviere have made trips to Lesbos in a bid to shore up their anti-immigrant credentials in their home country.

Lesbos has also been a flashpoint and a rallying point for Greece's own neo-Nazi movement, known as Golden Dawn, which at one point was Greece's third-largest party.

As the island in this corner of the Aegean sea has seen a greater influx of migrants it has also become more useful in sustaining far-right anti-immigrant narratives in Greece and for other far-right groups in Europe.

"The far-right is purposefully seeking conflicts around migration to reinforce its narrative of a clash of civilisations," says Maik Fielitz, an expert on the far-right in Greece.

With the influx of migrants into central and western Europe declining, the far-right is now seeking areas of conflict where it can tap into local discontent while also keeping the anti-immigrant flame alive in their home countries.

The Identitarian Movement emerged in the early 2000s and has attempted to frame itself as a new wave, eschewing the old left-right political dividing lines in Europe.

In practice, however, an academic researching the group has noted that it "does not bring anything new at the radical right. It renews ideas and thoughts from the second half of the 20th Century".

The ideas of the group mainly revolve around having ethnically pure European states. Still, unlike the neo-Nazi groups that are often associated with such ideas they have been dubbed as "hipsters of the far-right".

With an eye on the media, members are often young and dress like any other of their fashion-conscious peers.

Their messages are spread via slickly produced online videos with a high-production value set to booming music.

The activism the group is engaged in is far a far cry from the violence that has often marked neo-nazi rallies across Europe.

In 2016, the group won widespread publicity when it unfurled a banner at Berlin's iconic Brandenburg Gate protesting the Islamisation of Europe.

Then, as now, the extremist group wanted to highlight the rise in migration to Germany, which had allowed more than one million to come to the country.

As the EU has sought to clamp down on migration to the bloc sometimes through draconian means, the Greek frontier has become one of the main hotspots of migration which the group and its members are hoping to leverage. 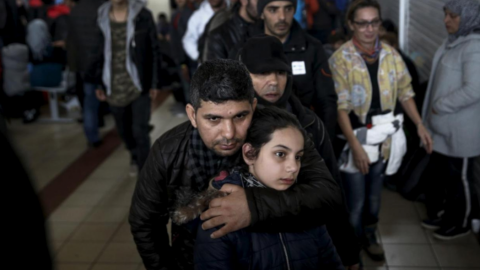 Far-right Greek party blamed for attacks on refugees and migrants

Has Greece’s neo-Nazi Golden Dawn party come to an end?