1
‘The Woman with Mimosas’ steps out of the museum into the street
2
$16 trillion: The cost of racism in the United States
3
Trump’s tax returns reveal a system that rewards all of America’s elite
4
Bevol: Connecting organisations with volunteers worldwide
5
Over 14 million people newly displaced in just first half of 2020

Unofficial results show Turkey's Kurdish citizens saved the campaign to change the constitution, led by Erdogan and the AK Party, from a possible upset.

ISTANBUL, Turkey — In Kasimpasa, a mixed neighbourhood in Istanbul's European side, where President Recep Tayyip Erdogan grew up, the importance of the referendum was palpable. On this sunny and warm Sunday, following what has been a long and loud referendum campaign, people calmly voted in a polling station in the Piripasa elementary school. As some of them were leaving the school after casting their votes, others arrive to vote for a "yes" or "no" choice in the country's crucial referendum.

For many Turkish citizens, the election — which ended with victory for the "yes" campaign, declared on Sunday evening — was about much more than simply the political system.

"We voted ‘yes' because Erdogan has made this country better," a couple from Turkey's Black Sea region told TRT World in the courtyard of the school after casting their ballots.

"I support Erdogan because of my own experience. I graduated from high school five years ago and wasn't allowed to attend my graduation ceremony just because I was wearing a headscarf," said Tugba, a 28-year-old housewife, who did not want to give her last name.

"Since then, the law has changed and we have much more freedoms," she said, referring to the conservative middle class as a whole. For the last fifteen years, the same middle class has overwhelmingly and consistently favoured Erdogan, who they widely consider as one of their own. Indeed, he rose to prominence from this humble neighbourhood to eventually became the country's top leader.

"Anyone who was a bit religious was considered second class citizens before [Erdogan came to power]," said Tugba's husband, Vedat, a 33-year-old electrician, who also preferred not to give his last name.

Tugba and Vedat said they had no fears that changing from a parliamentary to a presidential system might also possibly help an opposition political figure less amicable to their beliefs to become president one day in the future. The couple feels that there is little risk of the presidency ever going to a secularist candidate because more of Turkey's population supports conservative politicians.

Kurdish voters between "yes" and "no"

In most of the eastern and southeastern provinces, where a large Kurdish population lives, the "yes" campaign overall obtained better results compared with the AK Party's scores in recent parliamentary elections. Almost everywhere across those regions, a considerable amount of Kurdish citizens voted for the "yes" campaign which has been led by Erdogan and the governing AK Party. During the latest November 2015 elections, for instance, the AK Party received fewer Kurdish votes than the "yes" campaign won in favour of changing the constitution across most of the Kurdish-populated provinces.

Before the referendum, political analysts argued that if Kurdish citizens overwhelmingly voted against the proposed system change, it could help "no" campaign clinch a narrow victory. If Kurdish voters did not resoundingly reject the changes, in contrast, analysts argued that they could also help save the "yes" campaign from an unexpected loss. The unofficial results indicate that Turkish Kurds did indeed save the "yes" campaign from a possible upset.

Moreover, this has happened in spite of the fact that the AK Party had established a strong alliance with the Turkish nationalist MHP during the referendum campaign. The MHP has long held a hardline stance against Turkey's peace process which has aimed at bringing an end to the armed campaign and violence in the country's eastern and southeastern provinces.

The peace process, dubbed the "Resolution Process" by the state, was launched by Erdogan and the AK Party in early 2013. The PKK, which is recognised as a terrorist organisation by Turkey, the EU, the US, and NATO, has been conducting an armed campaign against Turkey since early 1980s, leading to the deaths of tens of thousands of people.

"[After all] this is the process for us. The way ETA acted should be your example," he emphasised.

Two weeks earlier, in early April, he had visited Diyarbakir, the main city in Kurdish-populated southeastern province, to rally support ahead of the referendum.

But Erdogan is also unlikely to forget the support he received from the MHP leader Devlet Bahceli, whose fellow nationalist harshly criticised for his "yes" stance and campaigned hard against the proposed constitutional change. The charismatic Turkish president is aware of the fact that he needs to find a balancing act between rewarding the MHP leadership for its support and Kurdish expectations, before renewing the peace process.

In addition, it will be no easy task to introduce a new peace process in the west of Turkey, where the "yes" campaign performed poorly. On April 16, Turkey's western provinces mostly voted "no." Without exception, the country's Mediterranean provinces which include significant migrant Kurdish populations have also voted "no."

A strong "no" has also been the ultimate result in all of the Thracian provinces which are located in the country's European territory as part of the Marmara region.

Though it was a narrow win, the "no" campaign has additionally claimed the country's biggest three metropolis, which are Istanbul, Ankara, and Izmir where considerable Kurdish populations also live, following the waves of migrants in the 1990s after the PKK launched its armed campaign against the Turkish state.

Despite the "no" vote, the gains made by the "yes" camp were significant enough to capture the president's attention.

"I like to emphasise the importance of the votes cast in eastern and southeastern [regions]. We have seen 10 to 20 percent increases in all of the southeastern region provinces," Erdogan highlighted during his victory speech on Sunday evening in Istanbul.

"God willing, these results will herald a new era for our country," he signalled.

Bakir Kuru, a 56-year-old retiree from Sivas, one of Turkey's central Anatolian provinces, felt that the country has recently become too polarised. That led most of the opposition groups to be united under the banner of the "no" campaign during the referendum debate, he said.

And while the "yes" campaign won victory, it did so by a very tight margin. Results show 51.3 percent voted "yes."

According to Kuru, those opposition forces included most of the grassroots supporters of the Nationalist Movement Party (MHP), even though the MHP leadership had allied themselves with the governing AK Party to support the proposed constitutional change. He noted that the Felicity Party (SP), a political offspring of religiously-inspired National Vision movement, which had also inspired Erdogan before he established the AK Party, also campaigned for the "no" side.

"The current parliamentary system could not be blamed for Turkey's existing problems. The AK Party [Justice and Development Party] government had fifteen years to resolve the country's issues. There is no guarantee that a change of the system could fix our problems [afterwards]," he said, in an interview while voting was still underway on Sunday.

Although Kuru expressed confidence that the results would be a resounding "no," the results of the referendum showed another win for Erdogan. Sunday's referendum marked Erdogan's 14th electoral victory. While pundits continue to debate the different factors that led to his slim victory this time around, there is no doubt that Turkey's solidly conservative Black Sea region played a decisive role in the success of the "yes" campaign. Erdogan's family is originally from the Black Sea area and voters there tend to be among his most loyal.

On the other hand, the "yes" campaign has received the least votes in Tunceli, an eastern province, where Kemal Kilicdaroglu, the leader of the main opposition Republican People's Party (CHP), was born and raised. The "no" campaign has reached its nationwide high point of 80 percent of the vote in Tunceli in the Sunday's referendum. 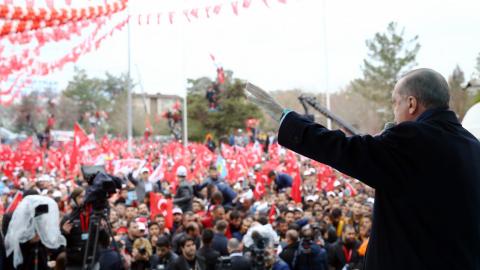 "Yes" and "no" campaigns court Kurdish voters ahead of Turkey's poll

$16 trillion: The cost of racism in the United States

1
‘The Woman with Mimosas’ steps out of the museum into the street
2
$16 trillion: The cost of racism in the United States
3
Trump’s tax returns reveal a system that rewards all of America’s elite
4
Bevol: Connecting organisations with volunteers worldwide
5
Over 14 million people newly displaced in just first half of 2020