In an exclusive interview with TRT World, Turkish Foreign Policy Adviser and Presidential Spokesperson Ibrahim Kalin speaks about pursuing the death penalty despite warnings from the EU and the possible reasons behind the failed coup attempt.

Turkey is still reeling a week after a coup attempt that left 246 people dead and more than 1,500 injured.

On July 15, 2016, a group of soldiers suspected of having links with the Fethullah Gulen terrorist organisation, took over strategic government structures which included the Turkish public broadcaster TRT in Ankara and its English channel, TRT World in Istanbul. The attempted coup failed when Turks took to the street to protect democracy.

One week later, Turkey has arrested or suspended thousands of military personnel, government officials and education staff who were allegedly involved in the coup.

A state of emergency has been implemented for the next three months.

Turks have been calling on the implementation of the death penalty for those involved in the coup. President Recep Tayyib Erdogan has said that he will listen to the call of the people and table a motion to Parliament.

In a One on One interview with TRT World, Turkish Foreign Policy Adviser and Presidential Spokesperson, Ibrahim Kalin, has asked the international community to empathize with the Turkish people who lost loved ones in the attempted coup.

"People outside Turkey need to understand why the emotions are so high and how people feel about this. Ordinary citizens died on the streets and they were killed by their own people," said Kalin. "From a point of view of a sense of justice, it's only natural for a people who have lived through this to ask for capital punishment."

The European Union (EU), though, has reminded Turkey that should the capital punishment law be approved, they would be excluded from the consideration of becoming a member of the EU.

"We will deal with it when and if that legislation passes the point," Kalin continued. "If it means suspending the EU membership process, that will be the case and we will have to deal with it at that point."

Kalin emphasised that for years, Turkey has pursued EU membership to the point of changing the country's legislation, assisting Europe with the refugee crisis by accepting more than three million Syrian immigrants into the country, and meeting other criteria. Yet, the EU continues to add more and more conditions.

"There is membership fatigue [in Turkey]. Turkey has done a great favour in taking care of more than three million refugees. We're still feeding them, looking after them and we stopped the flow of refugees to Europe," said Kalin.

"So the Turkey-EU refugee deal has worked and that should be celebrated. But instead of giving Turkish citizens the Schengen Visa or visa liberalisation, the EU has put some other conditions or requirements in regards to the anti-terrorism law," he continued.

According to Kalin, Turkey has been dealing with threats from the PKK, DAESH and the Gulenist movement for years and hence the anti-terrorism laws are there to protect the country.

"We have been fighting against ISIS [DAESH] and the PKK terrorism. The world has not paid attention to the PKK terrorist threat that has claimed the lives of hundreds of people. We have to take measures against this," he said.

"We have the Gulenist terrorist threat obviously. So there will not be any changes in our anti-terrorism laws."

On Wednesday, six days after the failed coup attempt, Erdogan announced Turkey will be under a state of emergency for the next three months which sees regional governors receiving increased powers and armed forces working in line with government orders.

Kalin termed the government's action as being in line with the Turkish Constitution.

"The government took it [the matter of emergency declaration] to the Parliament and it was passed not only with the vote of the ruling party but also [with that of] the opposition party," Kalin said.

The spokesperson said the government had stopped a military coup. "A coup carried out by the Gulenist terrorist elements within the Turkish army with support from their members within the judiciary, within other state institution."

He said there will be a legal action against those who planned the coup and those who participated in it.

"Also those who collaborated and helped from outside after the coup…we are going after these people," he added.

Commenting on international criticism which followed sweeping arrests in a short period of time after the quashed coup, he said, "The fight against Gulenist structures within state institutions has been under way for some time. There was already an ongoing process to identify these people."

Kalin added, "Some of these army generals who participated in the coup attempt, for example, were going to be either dismissed or not promoted in the next military high council meeting in August. So maybe they thought this was their last chance to do something to stop this. But the Gulenists had this idea from the very beginning."

The Turkish government has laid all blame for the failed coup attempt at the door of the Gulenist Movement led by Fethullah Gulen, a US-based cleric who has long been a controversial figure in Turkish politics.

"This coup attempt was carried out by a small group of our people within the Turkish army, and they don't represent the whole Turkish army. It was deadly and it turned into a bloody coup," said Kalin.

He went on to say no one expected the pro-coup plotters to be so murderous in their task.

"It shows the extent of which they can be so brutal. We've seen scenes that we have never seen before. Our own soldiers pointing guns at unarmed people - our own people."

Furthermore, he commended the people who heeded the call of Erdogan to take to the streets against pro-coup soldiers and fight for their democracy, freedom and the rule of law.

"We've seen for the first time a coup was stopped by the people themselves. On the one hand, they are celebrating their victory on the streets, on the other hand they want to make sure these things do not happen again. They are giving a very powerful message to the people that no matter what happens, they will be on the streets to protect their rights, their country, their unity," said Kalin.

"If you look at the mixture of the people on the streets, their are people from all walks of life, from all different political parties, from different political angles, ideological backgrounds. What we have seen after the coup is really a remarkable scene of unity and solidarity regardless of political differences," he continued.

Kalin has assured its neighbours it will continue to act against the ongoing security threat within the region despite the attempted coup and requests all countries to stand in solidarity with Turkey.

"Obviously the security threats in the region are not going anywhere as long as the war in Syria and security problems in Iraq continue. But its not only Turkey that's being affected by this - it's everybody, from Europe to all the Arab countries, to all the other countries [in the region]," said Kalin.

"That requires a regional and global perspective to deal with these issues. And of course, we would like to work with our allies and neighbours to deal with security issues. But we have to give priority to Turkey as we are battling with several terrorist threats at the same time. It's only natural for us to expect solidarity from our neighbours and allies."

Kalin thanked Turks as well as the international community for standing together against those who wanted to overthrow the government.

"We are grateful the world has stood with us for democracy and against the coup plotters. And I hope they will continue to stay with us in our struggle to further strengthen democracy, rule of law and freedom in this country." 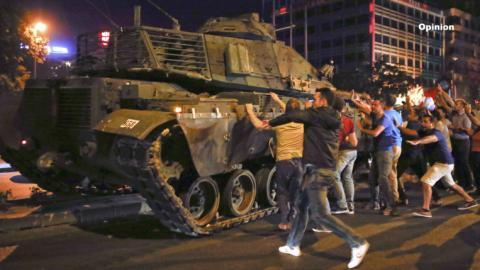 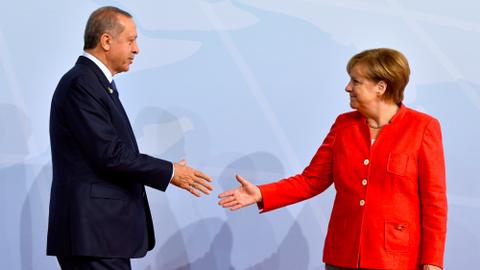