Close to 3,000 homes have been built as part of a campaign to provide displaced Syrians with safe places to live.

Turkish efforts to help resolve the dire humanitarian situation in northern Syria have taken a big leap forward with the completion of 2,816 housing units.

The homes are the first of 15,000 for displaced Syrians currently living in dire conditions in northern Syria after being forced to flee Assad regime bombardment.

Under the slogan “be a ceiling for the oppressed”, the Turkish Humanitarian Relief Agency has plans to provide shelter to 10,000 displaced Syrians in the Idlib and Aleppo governorates.

Their efforts are complemented by the Turkish Red Crescent, which is sending humanitarian aid trucks to Idlib.

The region was the scene of an Assad regime offensive to capture territory from the Syrian opposition, which resulted in tens of thousands fleeing.

Turkish forces put a halt to that campaign with the use of military drones with an eventual ceasefire brokered between Moscow and Ankara placing a halt to the fighting.

Erhan Yamlak, the deputy chairman for the project, said that Turkish efforts in the region would eventually help 90,000 people by providing shelter, as well as providing necessities, such as food, bedding, kitchen equipment, and electricity.

Syria is home to one of the world’s worst humanitarian crises, with more than six million people fleeing the country entirely and another five million internally displaced.

Estimates of those killed in the war exceed half a million people, with tens of thousands of more believed to be imprisoned in Assad regime prisons where torture and other abuses are rife.

Idlib remains the last major city held by the Syrian opposition. The Assad regime was able to claw back territory it lost after the 2011 uprising thanks to foreign intervention on the part of Russia and Iran.

Turkish citizens and foreign residents within Turkey are able to donate five Turkish liras to the efforts to help Syrians by texting the word ‘SURIYE’ to the number 3072. 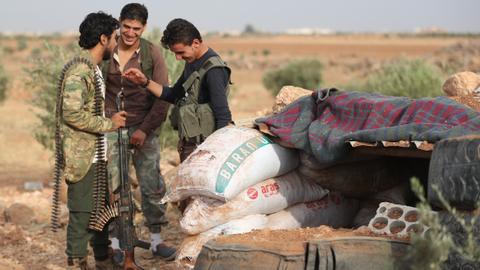