As the war hits its seventh year, Turkey remains the biggest provider of assistance, followed by Jordan and Lebanon. And Turkey has relied more on its own coffers rather than foreign aid to support the 2.75 million refugees living here.

The war in Syria has culminated into the worst humanitarian disaster of over half-a-century. Some argue that the scale of the crisis even surpasses World War II. Nearly five million Syrians have become refugees, according to the United Nations. And most of the Gulf states and European nations have either closed their borders or introduced strict immigration laws, leaving Syrians with ever diminishing options of where to flee.

With the war now in its seventh year and showing no sign of abating, many more Syrians continue to be forced out of their homeland. Lebanon and Jordan have grown weary of taking in more refugees. In 2015, the Jordanian government claimed that the refugee crisis cost the economy $2.1 billion. Lebanon cites similar reasons for its economic downturn; and the International Monetary Fund (IMF) agrees. Growth was down to just one percent in 2015, and a similar rate is predicted for 2016.

Turkey's role in shouldering the burden of the refugee influx has been lauded worldwide. Last spring, Donald Tusk, the head of the European Union, praised Turkey for setting an example "for the whole world on how we should treat refugees."

There are hopes the burden might be shared. In March 2016, the EU and Turkey reached a landmark agreement. Under that deal, the EU agreed to provide two billion euros to Turkey. The money will be spent for the welfare of refugees from education to health to housing. In recent months, Turkey accused the EU of not releasing the funds on time. The EU responded saying that the delay was caused by "bureaucratic processes."

There are times, too, when the Turkish government has faced public resentment, particularly in the southeast of the country, where most of the Syrians are either housed in camps or urban neighbourhoods.

The common perception among locals is that the Syrians are usurping economic space; willing to work for lower wages and therefore causing unemployment for local Turks. On the other hand, refugee camps are fast getting overpopulated with people. A container with two small rooms that has a kitchen and a bathroom attached is not enough for a family of eight to ten Syrians. The Turkish government, however, shows no hesitancy in hosting Turkey's Syrian neighbours.

Let's take a look at how much the largest host countries — Turkey, Lebanon and Jordan — are covering the financial cost of the Syrian refugee crisis.

NOTE: Turkey has generated most of the funding from public coffers, according to Turkey's Disaster and Emergency Management Presidency, or AFAD. Most recently, the Turkish government announced on February 22 that it had contributed over $12.1 billion towards the welfare of Syrian refugees since the outbreak of the war. Jordan's and Lebanon's response to the Syrian refugee crisis is largely funded by the financial aid from UNHCR. The Jordanian government, however, argues that 25 percent of its annual budget goes to the welfare of Syrian refugees, but does not release any official data on its spending.

For Syrian refugees, access to healthcare varies from country to country. In Jordan, many refugees struggle to receive medical care. The government has refused to provide free medical services to them since 2014, citing a lack of funding from international aid organisations and other budget constraints. As a result, 58 percent of Syrians suffering from chronic illnesses could not receive medical support, according to Amnesty International.

Lebanon is a slightly different case, with the government having covered 47 percent of primary healthcare for Syrian refugees, and leaving expensive medical support to foreign aid organisations.

Turkey relies on minimal foreign aid when it comes to providing primary and in-patient health care services to Syrian refugees. There is a dispensary in each refugee camp, where Turkish doctors and translators are deployed to provide free treatment and medicine. In case of medical emergency in the refugee camps, the Turkish government provides free transportation to hospitals.

All the three of the principle host countries — Turkey, Jordan and Lebanon — offer free education to Syrian refugees. But the overcrowding of schools and other logistical glitches have deprived tens of thousands of Syrian children from a primary education in all three countries. 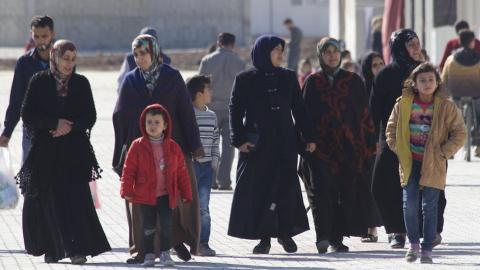