1
How we could lose up to 58 hours of sleep a year due to climate change
2
US, Taiwan creating new data exchange system closed to Russia, China
3
What are stablecoins and how did they trigger a crypto market crash?
4
Why is Iran developing a drone production line in Tajikistan?
5
Why internally displaced people worldwide have hit record high

In Somalia, an electoral impasse raises fears of a full blown conflict.

In Somalia, a national election was scheduled to be held on February 8, but not only did the election not take place, a power vacuum was created and violence followed.

Experts are warning that the country may now slip back into a full-blown civil war if the crisis is not resolved. On February 23, a suicide bomber exploded his vest, killing at least two people when police stopped him at the entry of a police station in the capital Mogadishu. It has not yet been confirmed whether the attack was directly related to the election crisis.

The main reason for Somalia's stalled election was a disagreement between the central federal government and leaders of five semi-autonomous regions on the ground rules of holding an election.

The country had a clan-based electoral model where Somalis don’t go to the polls to vote. Instead there is an indirect system where clan elders choose special delegates, and they pick the country’s lawmakers. Those lawmakers then choose the president.

But last year in February, President Mohamed Abdullahi Mohamed, aka Farmajo, signed a new bill that allowed regular citizens to vote in elections. It was a move that was met with criticism from the opposition. They said the new system, “one person, one vote” would require an extension of Abdullahi’s term.

This would have been the first time that Somali civilians could directly vote since the Somali Civil War broke out in 1991.

After a series of meetings between the central government and regional leaders, a new electoral framework was tabled - in essence it was an updated version of the indirect election system.

The implementation phase of the framework, however, brought new hurdles. These included the makeup of the Federal Electoral Implementation team and how parliamentary seats would be allocated, particularly in the Gedo district of Jubaland state that borders Kenya.

When election day arrived with no clear agreement, the incumbent President Abdullahi’s term ended, but he refused to leave: the country fell into political deadlock.

The opposition say they won’t recognise him as president anymore, but there is also no agreement for a new election in sight.

The security situation in Somalia is already fragile with Al Shabaab’s frequent attacks. They also threatened to attack the polls during elections

Following the stalled election, an alliance of Somali opposition leaders called for anti-government protests despite a government ban on demonstrations due to the pandemic. An opposition candidate, Abdirahman Abdishakur, who called for the rallies, claims Farmajo manipulated the election, aiming to stay in power indefinitely.

But the protests reportedly took a violent turn after the opposition refused police protection amid risks of Al Shabaab disruption.

Last week, on Friday, gunshots targeted a hotel where two opposition figures were staying. One of them was Famajo’s former deputy, who said it was an assassination attempt by the president. 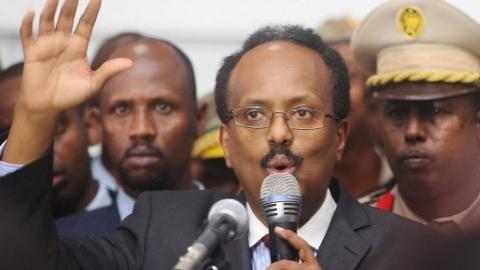 1
How we could lose up to 58 hours of sleep a year due to climate change
2
US, Taiwan creating new data exchange system closed to Russia, China
3
What are stablecoins and how did they trigger a crypto market crash?
4
Why is Iran developing a drone production line in Tajikistan?
5
Why internally displaced people worldwide have hit record high