Will an Indonesian cleric's release 'renew hope' for extremism?

Abu Bakar Bashir was imprisoned for his alleged role in the 2002 Bali bombing and his release on health grounds has raised security concerns in Indonesia.

Indonesia's firebrand cleric Abu Bakar Bashir was released from prison on January 8, triggering a debate over his murky past both in the country and abroad.

Bashir is a former spiritual leader of the Al Qaeda affiliated group, Jemaah Islamiyah (JI). The 82-year-old Imam was convicted in 2005 for his alleged role in the deadly Bali bombing in 2002, which killed at least 200 people, most of whom were foreign tourists.

As Bashir walked out of the prison gate in the country's West Java province, waving his hand at journalists, the event quickly featured in the international news cycle with the kin of Bali bombing victims slamming the Indonesian government. But in Indonesia, his release was expected, and it generated a muted response.

"His release would boost the sleeper cells of terror groups that are still loyal to him," Faisal Aby Moubharok, the director of Inter-Cultural Practice Research, told TRT World.

The 49 year old Moubharok said these small cells remained silent while Bashir was in prison and his release now "gives a new hope to them".

In 2014, a photo of Bashir emerged on social media. In it, he was carrying a Daesh (ISIS) flag. The photograph triggered the rumour of him having taken allegiance to Daesh, while serving his prison sentence in Central Java province.

According to Moubharok, Bashir's photograph becoming viral on Twitter indicated he had access to all sorts of people who were able to meet him in the prison. Due to a lack of strict vetting processes in the prison, he was declared to be the leader of a group named Jemaah Ansharut Khalifa, which is a Daesh affiliate in Indonesia.

Bashir’s son, Abdul Rochim, told TRT World that there was "no special reception" for his father's homecoming, precisely because of the Covid-19 crisis.

Bashir immediately went to his house, which is inside the Al Mukmin Islamic Boarding School in Central Java province. He was escorted inside his home by one of Al Mukmin's teachers. The two had lunch together.

Compared to the summer of 2019, when the courts were pondering Bashir's release ahead of the presidential election and hordes of his followers showed up outside the boarding school, this time he returned to his home without any commotion or fanfare.

The talk of Bashir's release had strong political underpinnings. According to several Indonesian political analysts, Joko Widodo, the current president of Indonesia, wanted to attract the radical Muslim voters and signalling Bashir's release was the best bait for them.

Although the Indonesian government justified advocating his release citing the 'ailing' health of the cleric, the courts decided to keep him in prison in 2019 because Bashir refused to pledge allegiance to Indonesia's founding ideology, Pancasila, which is mainly based on "confession to one God" besides striving for the unity of a democratic Indonesia and building a just and civilised society.

Al Chaidar Abdurrahman Putah, an expert on extremism and the author of a book titled Globalism, Terrorism and Islamism in Southeast Asia, said that Bashir is likely to attract more supporters from members of former hardliner groups like Islam Defenders Front (FPI), which was banned by the Indonesian government in December 2020. While the FPI's spiritual leader Rizieq Shihab is under police detention, Putah argues that his followers might want to see Bashir succeed him.

Shihab was detained on the suspicion of violating Covid-19 health protocol.  In November 2020, he addressed a gathering of 3000 people to mark the anniversary of the birth of the Prophet Muhammad. The Indonesian police saw it as a violation Covid-19 protocol.

"Bashir is likely to get close to this group. But the question is who will be the new leader of FPI-- will it be him (Bashir) or Rizieq Shihab. Only the time will tell," Chaidar said.

The FPI supported the release of Bashir throughout last year, with Shihab making the demand through the organisation's YouTube channel.

A few years ago, Tony Soemarno went to meet Bashir in prison. A survivor of the Bali bombing, Soemarno wanted to talk to Bashir about how the incident had impacted him, turning his life upside down. Soemarno was looking for closure and he thought he might get it by confronting the cleric, who was accused of inspiring the perpetrators of the blasts with his sermons.

Speaking to TRT World, Soemarno said he has forgiven Bashir and respects the court's decision for ordering his release. He however expects the government to keep a tab on his activities to ensure none of his followers engage in another terror act in the future.

"As a survivor, I hope there will be no victims like me in the future. We need a very serious watch, not just a usual watch, as we know what kind of man he is," said Soemarno, who is also a member of the Bombs Victim Association (ASKOBI).

The families of victims who came from foreign countries are upset with Bashir's release. Australian news channel ABC Australia spoke to Sandra Thompson, whose son was killed in the Bali bombing, and she said she wished Bashir to remain a prisoner for the rest of his life.

The Australian government urged the Indonesian government to "watch out" for any potential act of terror that may emerge after the release. Out of 200 victims of the Bali bombing, 88 were Australians.

"Our embassy in Jakarta has made clear explanation about our concern that these kinds of people should be prevented from inciting their followers to attack innocent people," said the Australian foreign ministry.

In response to all the doubts, apprehensions and criticisms of his father's release, Rochim said that Bashir will spend most of his time at home since old age has made him weak and frail, but he will not stop preaching.

“He will preach just around the neighbourhood,” he said.

Johanes Hutabarat is an Indonesian journalist based in Jakarta. Aryo Bhawono is a freelance journalist based in Jakarta, Indonesia. 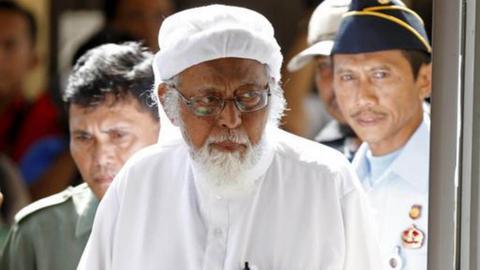