At least 25 terrorists were killed after Turkey carried out air strikes in retaliation to attacks by the PYD on Turkish armed forces backing the Free Syrian Army (FSA) fighting against DAESH in the city of Jarabulus, northern Syria according to Turkish Army's statement on Sunday.

During one of the attacks, a Turkish soldier was killed and three others injured on Saturday.

The PYD is affiliated with the PKK terrorist organisation, which has been waging war against Turkey since 1984.

The PKK are considered to be a terrorist organisation by Turkey, EU, US and NATO.

Turkey launched the cross-border offensive on Wednesday to support the FSA in its fight against terror group DAESH.

The operation is targeting DAESH positions as part of Ankara's Operation Euphrates Shield.

Turkish-backed FSA fighters are now cleaning Jarabulus of mines and explosives laid by DAESH before they were driven out from the northern city.

On Thursday, the Turkish-backed FSA gained full control of Jarabulus after the launch of air and ground assault as part of the cross-border campaign by the Turkish armed forces supported by US led coalition airstrikes a day earlier.

Jarabulus is located just one kilometre from the Turkey-Syria border.

Life is returning to normal in Jarabulus, days after Operation Euphrates Shield was started.

Workplaces are re-opening and children have started playing on the streets.

One business owner in the district, requesting anonymity due to security concerns, expressed satisfaction over reopening his shop.

He said he was happy to regain his freedom as the Turkish-backed FSA cleaned the district of DAESH militants.

An electronic materials business owner, who also did not want to be identified, said he was happy to see his business open again after the withdrawal of DAESH militants.

He wished for life in the district to return to normal as soon as possible. 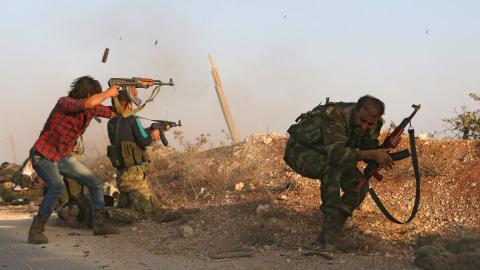 Car bomb in Syria kills at least 17 near Turkish border