The militant group, known as Niger Delta Avengers, has claimed a number of armed attacks on the oil facilities in the Niger Delta in the southern region of Nigeria.

A Nigerian militant group, known as Niger Delta Avengers, on Sunday announced a unilateral ceasefire and offered a meaningful dialogue with the government.

The group has claimed a number of armed attacks on the oil facilities in the Niger Delta in the southern region of Nigeria.

In a statement, the Niger Delta Avengers says, "We are going to continue the observation of our announced ceasefire of hostilities in the Niger Delta against ... the multinational oil corporations."

However, there was no official response to the group's ceasefire and dialogue offer.

But the militant outfit, mostly run by poverty-stricken unemployed youth, also warned that they would continue with their systematic warfare if the security agencies harass, arrest or intimidate innocent civilians.

"But we will continuously adopt our asymmetric warfare during this period" should Nigerian security agencies "arrest, intimidate, invade and harass innocent citizens."

The restive southern swampland region has been rocked by violence against oil and gas pipelines since the start of the year, reducing the OPEC member's output by 700,000 barrels a day to 1.56 million bpd.

"We promise to fight more for the Niger Delta, if this opportunity fails," it said.

Any ceasefire agreement would be very difficult to enforce as the militant scene is divided into small groups dominated by unemployed youth driven by poverty, who are difficult to control even by their "generals".

Avengers aren't the only worry for oil companies Nigeria. The Delta's protesting jobless youth are becoming a force https://t.co/5wKU5fFbin

The Niger Delta Avengers have claimed several major attacks but have been apparently less active in recent weeks, which has led to speculation about a ceasefire as the government has been trying for two months to reach out to the militants.

The group said it would support a dialogue "to engage with the federal government of Nigeria, representatives from the home countries of all multinational Oil Corporations and neutral international mediators."

There was no immediate statement from the government of President Muhammadu Buhari but a youth council representing the largest ethnic group in the swampland urged the government to seize the opportunity for dialogue.

"We welcome the conditional declaration of ceasefire by the Niger Delta Avengers if it is actually from them," the Ijaw Youth Council said in a statement.

"We call on the federal government, especially President Buhari, to take advantage of this ceasefire to aggressively dialogue with the people of the region to address the issues affecting the region."

It only said it wanted talks to focus on de-escalating the Niger Delta conflict. The group previously said it was fighting for oil revenues to drag the region out of poverty, floating even the idea of secession, a goal out of question for the government.

Like other militant groups, the Avengers has apparently split, making it difficult for the government to identify the right people to talk to. 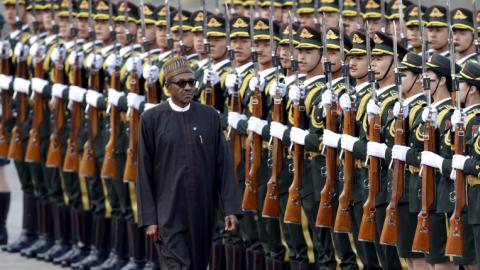