Al Qaeda-affiliated armed group denied on Saturday that it had killed 15 Yemeni soldiers loyal to President Abd Rabbuh Mansur Hadi in the Ahwar region of the country.

Local officials and residents earlier said militants were kidnapped soldiers while travelling from the southern port of Aden to al-Mahra Province in eastern Yemen via Ahwar, a city in Abyan Province under Al Qaeda control.

However, Al Qaeda denied any responsibility of killings in a online statement.

The warring parties in Yemen have agreed to a cessation of hostilities starting at midnight on April 10 and peace talks in Kuwait beginning a week later, United Nations special envoy Ismail Ould Cheikh Ahmed announced in late March.

There have already been several failed attempts to defuse the conflict in Yemen, which has drawn in regional foes Saudi Arabia and Iran, and triggered a humanitarian crisis in the Arab world's poorest country.

The Saudi Arabia-led military coalition formally began its intervention in Yemen on March 25, 2015 after the Houthi rebels advanced on the southern city of Aden, forcing Yemeni President Hadi to flee the city.

According to Yemen's Ministry of Public Health, at least 7,000 people, including 1600 children, have been killed in the ongoing civil war in Yemen, nearly half of them civilians. More than 16,500 people have been injured since March 2015.

Twenty million people in the country are in need of aid, 13 million are facing food shortages and 9.4 million are having difficulties accessing drinking water. 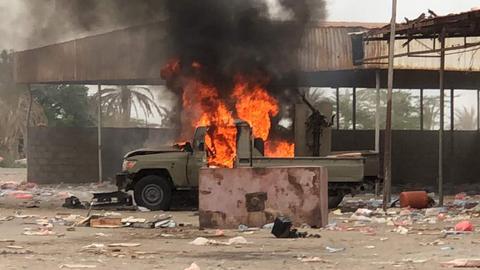 Fighting rages around airport in Yemen port city of Hudaida