Suspected Al Shabaab gunmen attack police station in the town of Pandanguo, killing three police officers and forcing villagers to flee. At least 28 people have died in attacks by the militant group in the last six weeks.

Suspected Somali al Shabaab militants killed at least three police officers on Wednesday during a siege on a northeastern Kenyan town that sparked a day-long gun battle, a senior police official said. At least one policeman was missing.

The raid came after a series of attacks in Kenya claimed by Somali militants, killing at least 28 people in the last six weeks.

The gunmen attacked the police station in the town of Pandanguo in the coastal district of Lamu around 6 am (0300 GMT), forcing villagers to flee, according to residents.

By 6 pm, three policemen had been killed, one was missing and a gun battle was continuing, police said.

"Reinforcements sent to engage the enemy have killed several terrorists."

The militants raided a dispensary for drugs as well as houses for food items, clothes, and other valuables, witnesses said.

Smoke could be seen rising from the village later in the day, near Kenya's border with Somalia.

The al Qaeda-linked al Shabaab group ramped up attacks in neighbouring Kenya after Nairobi sent troops into Somalia in 2011 to join the African Union force.

In July 2014, more than 60 militants attacked the same village, torched houses and stole drugs at the same dispensary.

In a separate incident in Somalia, an air strike reportedly killed 10 al Shabaab militants near the southern port city of Kismayo, the Mogadishu government said.

The US military carried out a strike in Somalia against the al Shabaab militant group on July 4, the Pentagon said on Wednesday, the second attack on the group in the last few days.

The strike occurred about 300 miles (480 km) south-west of the Somali capital Mogadishu, the Pentagon said. It did not disclose additional information such as the number of fighters killed.

On Monday, the US military said it carried out an air strike against al Shabaab on July 2.

Ethiopia, Kenya and the US have all conducted air raids on Somali territory against the group which aims to topple Somalia's government, drive out African Union peacekeeping troops and impose its own harsh interpretation of Islamic law. 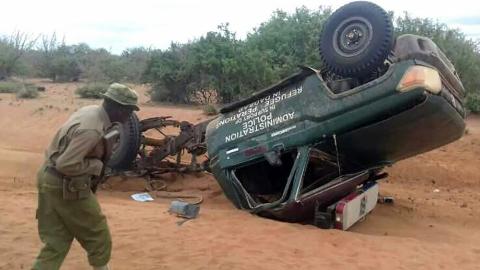