Al Jazeera Arabic blocked in the UAE and Saudi Arabia

Has a media war begun in the Gulf? Is this yet another example of the political tension between Qatar and its neighbours?

The website of the Qatar-backed Al Jazeera news channel was blocked in Saudi Arabia and the UAE on Wednesday.

"This was a political decision and a direct attack on the Emir of Qatar" a source close to Al Jazeera told TRT World.

The statements drew the ire of Saudi and Emirati governments on the back of the Trump administration's visit to Saudi Arabia.

"Problems accumulated at the latest Arab-Islamic-American Summit. Al Jazeera is based in Qatar and is one of the few news agencies that can provide an alternative view on the situation in Saudi Arabia and the Emirates, and it has been brought down for this reason," the source said.

Al Jazeera executives were unwilling to make official comments as they were still attempting to resolve the issue through backchannels.

But Qatar's foreign ministry has claimed that its state agency had been hacked and the statements were forged.

The site published quotes from the Emir, which said, "There is no wisdom in harbouring hostility towards Iran" in response to the US president's first foreign trip to Riyadh at the Arab-Islamic-American summit. The quotes also pointed to tensions with his government and the Trump administration, noting that Iran was an "Islamic power."

More controversially, the quotes concluded that relations with Israel are "good" and that Hamas was the official representative of Palestinians.

Political backlash or another regular case of censorship?

However, it appears that the damage was done, as a decision soon followed to block Al Jazeera's Arabic website from the UAE and Saudi Arabia the following day.

However not all agree that the decision is a political one.

The question of freedom of the press in Gulf states has been raised in countries where WhatsApp calls, Skype and other social media platforms are closely monitored or often restricted.

This is not a first for Al Jazeera

The block is not a first for Al Jazeera; Egypt blocked the international media channel over its coverage of the 2013 popular coup which ousted then-president Mohammed Morsi from power.

The move was seen as part of the political tensions between the Egyptian military establishment and Qatar, a staunch supporter and sponsor of the Muslim Brotherhood during their short-lived tenure.

Others within the Egyptian government and media had blamed it for what they saw as biased coverage of events in the country. The war of words quickly translated to the imprisonment of journalists under criminal charges for inciting chaos in the Arab world's most populous country. 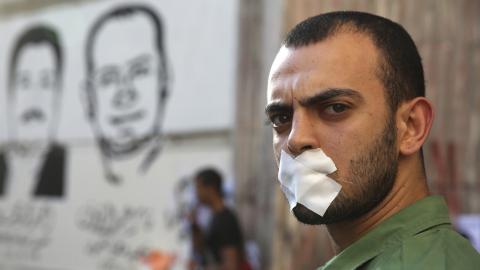