Report published by the rights group focuses on refugees and migrants forcibly returned to Libya detention camps, finding new evidence of abuses, including being forced to barter sex for clean water, food and access to sanitation.

Amnesty International has condemned Europe's "shameful role" in the "horrific violations" committed against migrants forcibly returned to Libya after trying to cross the Mediterranean.

In a new report published on Thursday, the human rights group finds new evidence of abuses against migrants and refugees held in Libyan detention camps, including sexual violence at the hands of guards and being forced to barter sex for clean water, food and access to sanitation.

The report is based on interviews with 53 refugees and migrants in detention in Libya, 49 of whom were detained directly following their interceptions at sea by the Libyan coastguard in 2020 and 2021.

The majority of the refugees, from countries like Nigeria, Syria and Somalia, were still in Libya and had either fled the camps or had access to telephones. Conditions in the camps, the report suggests, are worsening despite promises to address them.

At the end of 2020, Libya's Directorate for Combatting Illegal Migration, a department of the interior ministry supported by the European Union, took over two detention centres previously run by militias from where hundreds of refugees and migrants had forcibly disappeared.

Amnesty found that despite the rebranding, violations did not stop and instead were "legitimised".

A female detainee at Tripoli's Shara' al Zawiya detention centre, which as recently placed under the DCIM, told Amnesty she was heavily beaten after she refused to be coerced into sex, with other testimonies alleging guards raped women and demanded sex in exchange for their release or clean water.

The report details similar violations taking place across seven other centres in Libya, including men saying they were forced to wear only underwear in an attempt to humiliate them. Others, including boys, described being groped, prodded and violated.

The inhuman treatment follows multiple reports since 2017 of beatings, torture and a lack of sanitation and food.

According to the UN Refugee Agency, UNHCR, between January and June this year more than 13,000 migrants and refugees were intercepted and returned to Libya by the EU-funded Libyan coastguards, more than in all of 2020.

While data is unreliable, Amnesty said some 6,100 people were transferred to camps by the end of June.

Diana Eltahawy, Amnesty's deputy director for the Middle East and North Africa, said the report "sheds new light on the suffering of people intercepted at sea and returned to Libya, where they are immediately funnelled into arbitrary detention and systematically subjected to torture, sexual violence, forced labour and other exploitation with total impunity."

European nations "have shamefully continued to enable and assist Libyan coastguards in capturing people at sea and forcibly returning them to the hellscape of detention in Libya, despite knowing full well the horrors they will endure", Eltahawy added. She argued that Libya's detention network is "rotten to its core and must be dismantled".

Frontex, the European Border and Coast Guard agency, carries out aerial surveillance over the Mediterranean to identify refugee and migrants’ boats at sea, while Italy and other EU member states continue to grant material assistance to Libyan coastguards and are working to establish a maritime coordination centre in Tripoli’s port.

Nearly 900 migrants have died this year trying to reach Europe from North Africa, according to the International Organization for Migration.

Despite a truce between Libya's warring factions since October as part of a U.N.-backed peace plan following the fall of Muammar Gaddafi in 2011, armed groups still hold power on the ground, with some controlling migrant camps.

Some EU lawmakers have urged the European Commission, the EU executive, to stop funding the coast guards, saying that Libya was not a "safe country" for migrants. UN agencies have also denounced the ongoing violations. 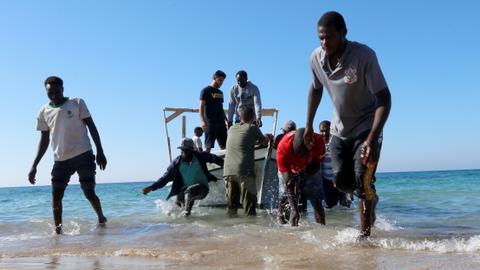