Anti-DAESH coalition strikes in Syria may have hit civilians

CENTCOM yet to release number of dead or injured over the past week.

The US military said on Tuesday that three of several strikes targetting DAESH in Syria over the past week "may have resulted in civilian casualties."

The statement was released one day after a nationwide cease-fire, brokered and announced by the US and Russia, came into effect. The fragile truce has been marred by continued reports of violations.

United States Central Command (CENTCOM) did not say how many had died or were injured in coalition strikes on September 7, September 10 and September 12.

The coalition has also admitted to causing civilian casualties in its campaign against DAESH several times in the past.

Multiple strikes over the past week targetted DAESH oil tankers, tactical units and vehicles in Syria's northeastern areas of Deir al-Zor and Al-Shaddadi.

Civilian cars were said to have driven into the target areas after aerial bombardments had commenced. Another strike conducted on September 10 near Raqqah may have also killed civilians.

The US-led coalition has been conducting air strikes against DAESH both in Syria and Iraq under the command of a joint taskforce, Operation Inherent Resolve formed in October 2014.

United States, France, Australia, Jordan, United Kingdom, Denmark, Belgium, Saudi Arabia, Turkey and UAE are among other countries participating in the coalition with the aim of defeating DAESH and stabilising areas under the control of the terrorist organisation.

Germany is also a member of the coalition and has provided six Tornado aircraft that are parked at Turkey's Incirlik airbase. The aircraft are said to be deployed for reconnaissance missions.

Russia has also been conducting airstrikes in Syria with the stated aim of targetting DAESH. But the US-led coalition have pointed to the high number of civilian casualties as a result of Russia's intervention.

Syria has been locked in a violent conflict since early 2011, when the regime of Bashar al-Assad cracked down on pro-democracy protests with unexpected ferocity.

Since then, more than a quarter-million people have been killed and more than 10 million displaced across the war-torn country, according to the UN.

The Syrian Center for Policy Research puts the death toll from the six-year conflict at over 470,000 people. 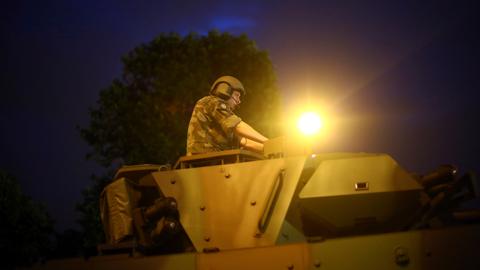