At least 120 such cases recorded against civilians in the capital, Juba, since fighting erupted three weeks ago. Fear of a return of civil war in South Sudan simmers after President Salva Kiir replaces Vice President Riek Machar.

The United Nations said on Wednesday there were at least 120 cases of sexual violence and rape against civilians in South Sudan's capital Juba since fighting erupted three weeks ago between troops loyal to the country's rival leaders.

At least 272 people were killed before the leaders ordered a ceasefire.

UN spokesman Farhan Haq said the UN peacekeeping mission in South Sudan continued to receive "deeply disturbing reports of sexual violence, including rape and gang rape, by soldiers in uniform and men in plain clothes against civilians, including minors, around UN House and in other areas of Juba."

Haq said UN peacekeepers had stepped up patrols and were also providing "protection at designated times to women when they go out of the Protection of Civilians sites to collect firewood and procure other non-food items."

The United Nations is protecting tens of thousands of people at sites in Juba and elsewhere in South Sudan.

Haq said the United Nations called on all parties to immediately sanction the soldiers responsible for "these unspeakable acts of violence."

South Sudan, which gained independence from Sudan in 2011, descended into civil war after Kiir fired Machar as vice president in 2013. More than 10,000 people have been killed and some 2 million displaced.

The civil war ended when Kiir reappointed Machar earlier this year under a peace deal agreed in August 2015.

"Both parties to the conflict have committed violations of international humanitarian law and gross human rights abuses, including mass killings, rape and other forms of sexual violence," according to an Amnesty International report published in August 2015.

Franz Rauchenstein, the then head of the International Committee of the Red Cross delegation, said in October last year that women in South Sudan suffered unprecedented levels of sexual violence during the two years of civil war.

A report issued by the UN earlier this year said that the government had operated "scorched earth policy" of deliberate rape, pillage and killing of civilians during the civil war.

Groups allied to the government were allowed to rape women in lieu of wages, the report had said.

Riek Machar left Juba following the outbreak of violence earlier this month, saying he would only return to the capital after international troops are deployed as a buffer force to separate his forces from Kiir's.

After the Vice President's exit, Kiir issued an ultimatum last week, demanding that Machar contact him within 48 hours and return to Juba to salvage the peace deal, or face replacement.

Meanwhile, Machar said on Friday that he had fired a former chief opposition negotiator General Taban Deng Gai and accused him of defecting to Kiir's party.

Upon the end of his deadline, Kiir replaced Machar on Monday with Deng Gai who has broken ranks with Machar, and has the support of some other opposition members.

US State Department spokeswoman Elizabeth Trudeau said some members of the South Sudanese opposition had met in Juba on Saturday and agreed to appoint Deng Gai as vice president.

"In terms of this and whether it's allowed under the peace agreement is going to be a question for the leadership of South Sudan," Trudeau told reporters.

The United Nations warned South Sudan's President Salva Kiir on Tuesday that any political appointments must be consistent with a peace deal which states that the vice president must be chosen by the South Sudan Armed Opposition.

"Any political appointments need to be consistent with the provisions outlined in the peace agreement," Haq told reporters in New York on Tuesday.

He added, "We call on all parties to ensure that the ceasefire is maintained and that any divisions within the opposition or between the parties be dealt with peacefully through dialogue." 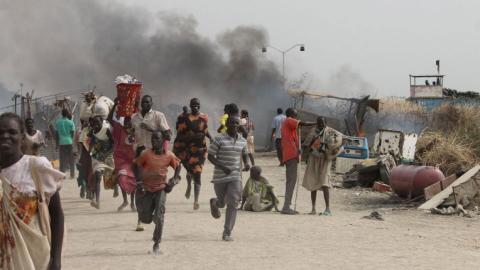 Genesis of the South Sudan conflict