Nabeel Rajab, a key figure of 2011 pro-democracy protests in Bahrain, was convicted over tweets alleging the torture of prisoners in his country and criticism of Saudi Arabia's air strikes in Yemen

A Bahraini human rights activist was sentenced to five years in prison on Wednesday for criticising Saudi Arabia's air strikes in Yemen and accusing Bahrain's prison authorities of torture, his lawyer and fellow activists said.

The United States, which has a major naval base in the country, has expressed concern about the case of Nabeel Rajab, a leading figure in pro-democracy protests that swept Bahrain in 2011, who was already serving a two-year sentence over a news interview in which he said Bahrain tortured political prisoners.

The new convictions were for "insulting a neighbouring country" and "insulting national institutions" in comments posted on Twitter, activists said.

There was no immediate comment from the Bahraini government.

Today’s Conviction based on:
- Condemning the Saudi-led war in Yemen

Sayed Ahmed Alwadaei, an activist with the London-based Bahrain Institute for Rights and Democracy (BIRD), said Bahraini courts were barring citizens from criticising the authorities.

"Instead of rewarding Nabeel Rajab for his brave and commendable exposure of human rights abuses and advocacy for peace, the authorities have chosen to punish the messenger."

Bahrain has cracked down on perceived threats since the 2011 protests inspired by the "Arab Spring", led mainly by members of its majority Shia population, were quashed with help from Gulf Arab neighbours.

The Sunni Muslim-led monarchy has closed two main political groups, revoked the citizenship of the top Shia cleric and banned activists from travel and put some on trial.

Authorities accuse Iran, the region's majority Shia power, of being behind years of militant bomb and gun attacks on its security forces, something Iran denies.

Bahrain hosts the US Fifth Fleet, a key naval base in the oil exporting region riven by animosity between Bahrain's main ally, Saudi Arabia, and Iran.

A US embassy representative attended an earlier hearing for Rajab, State Department spokeswoman Heather Nauert said on Tuesday, adding that Washington was "disappointed" his earlier verdict had been upheld.

"He's a prominent human rights activist ... we continue to have conversations with the government of Bahrain about our very serious concerns about this," Nauert said.

Rajab's son Adam tweeted on Wednesday that, on hearing the verdict, his father laughed in the courtroom and flashed a peace sign. 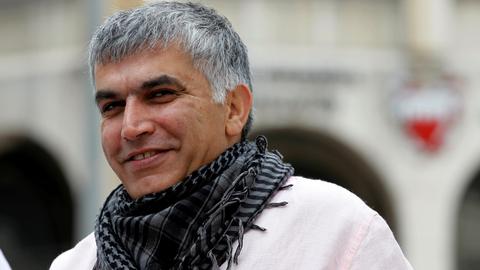