The Balfour Declaration: Britain's gift to Jews or Palestine betrayed?

A century ago, British foreign secretary Arthur Balfour wrote a letter to Jewish politician Walter Rothschild. This letter, which later became known as the Balfour Declaration, had no legal status. But it led to the creation of the state of Israel.

What was the Balfour Declaration about?

The Balfour Declaration was no more than a short and vague letter dated November 2, 1917, from Britain's Foreign Secretary Arthur Balfour to Walter Rothschild, the Zionist figurehead of the British Jewish community.

In the letter, Balfour stated that the British government "viewed with favour the establishment in Palestine of a national home for the Jewish people, and will use their best endeavours to facilitate the achievement of this object."

It is important to note this letter did not promise Jews a state, but a land in which they could take refuge.

Some historians argue the land of Palestine became a twice promised land after Britain offered it to the Jews.

In 1916, the British High Commissioner in Egypt, Sir Henry McMahon offered Sharif Hussein of Mecca an independent Arab state if the Arabs would help the British fight against the Ottoman Empire.

This offer, known as the Ḥussein-McMahon correspondence, remained a point of heated contention thereafter.

Palestinians argue that the Arabs were not on the losing side of Britain's war against Ottomans, and blame Britain for promising a land it did not own.

Zionism is the ideology that brought Jews back to Israel.

It was originally a movement for the re-establishment of a Jewish nation in the land of Palestine. Since Israel declared independence, the movement's mission has evolved into the development and protection of the country.

Zionism was ideologically in place in the 19th century, the time that nationalism started to rise in Europe.

In 1897, the First Zionist Congress was held in Switzerland and Zionism turned into an international political movement under Austrian-Jewish journalist Theodor Herzl.

Who was Arthur Balfour?

Arthur Balfour was a British politician who is perhaps best remembered for his strong support of Zionism.

Balfour served as prime minister for three years until 1905, and as foreign secretary from 1916 to 1919.

In 1906, Balfour had met and been impressed by Chaim Weizmann, a Russian Jewish chemist who was giving lectures at Manchester University at the time.

By inventing a new method for producing synthetic acetone from corn, Weizmann gave valuable assistance to the British munitions industry.

Acetone is essential to ammunition production. Without it, a cloud of smoke is created whenever a cannon is fired, thereby exposing the cannon's location.

At the time of the Second World War, the British munitions industry was in dire need of the chemical compound, and Weizmann's invention came to the rescue.

Some believe that the Balfour Declaration had been a reward for Weizmann's chemical assistance to the British.

Weizmann, who later became the first president of Israel, denied this claim.

Why did British leaders favour the Zionist idea?

Balfour had a deeply-rooted biblical faith in evangelism even before he met Weizmann.

He had believed that Christendom's debt to Judaism had been shamefully repaid by the Christian community, so giving their ancestral homeland to Jews would allow Britain the honour of righting the wrong.

Lloyd George, the British prime minister of that time, also agreed with Balfour. But the reason behind his sympathy for the Zionist dream was more pragmatic and less idealistic.

"There we were ... with your people [the Jews] in every country in the world, very powerful. You may say you have been oppressed and persecuted — that has been your power. You have been hammered into fine steel ... and therefore we wanted your help. We thought it would be very useful."

What were the previous plans?

Previously in 1903, the British colonial secretary Joseph Chamberlain, offered Zionists the Guas Ngishu plateau near Nairobi in East Africa for a Jewish settlement under the British flag.

This plan, which was called the "Uganda Scheme," was a response to pogroms against the Jewish people in Russia. The offered land was thought suitable thanks to its relative isolation being surrounded by the Mau Forest.

However, Zionist leadership rejected this plan in a congress it held in 1905, and continued to lobby for a homeland in Palestine, then a part of the Ottoman Empire.

Their dream began to seem less unrealistic after Britain declared war on the Ottomans in 1914.

How did Arabs react to the declaration?

Arabs knew that Zionists were lobbying for the land of Palestine. But in the beginning, only a few Arabs were aware of Britain's plans. That is why it took the Arabs some time to voice their objection.

The Britons in Palestine informed Sharif Hussein and Emir Faisal about the plan. But, George argued that the people in Palestine could not be consulted — because they were in enemy territory.

The British government had Jewish members, but there were no Palestinian Arabs. Very few European leaders raised their voices on behalf of the Arabs, but their voices were drowned out.

The Arabs in Palestine held several demonstrations against the declaration.

As a result of the Balfour Declaration, thousands of European Jews moved to Palestine.

The growing Jewish population in Palestine caused a conflict between Jews and the Arabs who were already frustrated by Britain's plan.

In the 1930s, British rule limited Jewish immigration to Palestine. But Jews formed militias to fight against Arabs and British rule.

After the tensions escalated further, the British decided to leave what had become a mess. It terminated its mandate over Palestine in 1948.

And this was just the beginning of the longstanding Israeli-Palestinian conflict. 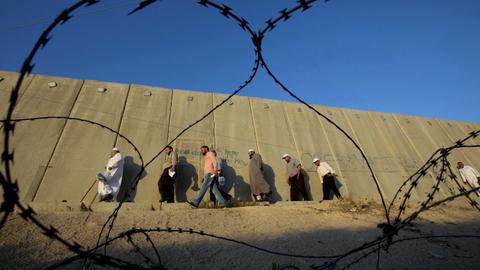 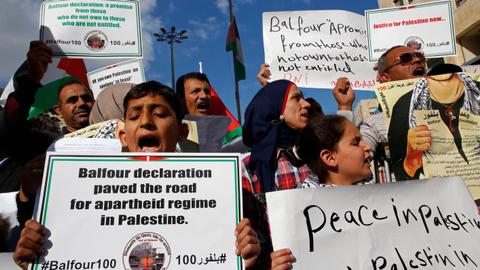