At least nine soldiers and two civilians were killed in the gruesome attack carried out about 500 kilometres south of Tripoli.

At least 11 people were beheaded on Wednesday after Daesh attacked a checkpoint controlled by Libyan military strongman Khalifa Haftar south of Tripoli, a spokesman for his forces said.

"At least nine soldiers were beheaded... in addition to two civilians" at the checkpoint about 500 kilometres (300 miles) south of Tripoli, Colonel Ahmad Al Mesmari said.

Daesh claimed the dawn attack on a checkpoint run by Haftar's forces in the Al Jufra region.

Libya has been rocked by chaos since the 2011 fall and killing of Muammar Gaddafi in a NATO-backed revolution.

Militants, arms dealers and people traffickers have gained a foothold there as multiple authorities and dozens of militias vie for power.

Forces allied with the United Nations-backed Government of National Accord drove Daesh from their stronghold of Sirte on the Mediterranean coast in December.

The head of the GNA underlined that the battle against rebels was not over, and Daesh has claimed very few attacks in Libya since.

Armed groups are continuing to hunt down members of the group who fled Sirte as the city fell.

But analysts and military sources say the group remains active in Libya, particularly the desert south, where the GNA holds little sway.

Haftar, who backs a rival administration that refuses to recognise the GNA, controls much of the country's vast southern desert.

His self-proclaimed Libyan National Army in May seized the Tamenhant base near the southern city of Sebha after driving out a pro-GNA militia.

Also in July, Haftar announced the "total liberation" of Benghazi, three years after he launched a military operation to seize the city.

But clashes have continued in the city, a bastion of the 2011 uprising that later fell to the militants

Forces loyal to Haftar regularly blame attacks against them on Daesh, particularly in Benghazi. 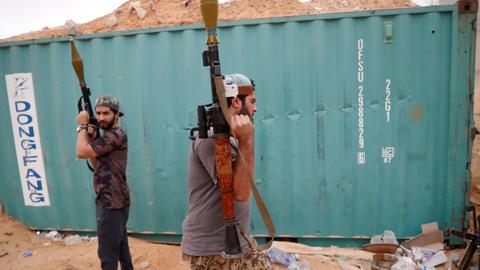