Thousands buried in 72 mass graves across Iraq and Syria

An investigation carried out by the Associated Press has found evidence of mass atrocities across Iraq and Syria.

Nearly 15,000 victims of mass slaughter may be buried in 72 mass graves across Iraq and Syria, an investigation by the Associated Press has found.

Using exclusive interviews, photos and research, the figures were obtained from excavations by Iraqi officials, the testimony of survivors, DAESH propaganda campaigns and analysis of the burial terrain.

In Syria, AP has obtained locations for 17 mass graves, including one with the bodies of hundreds of members of a single tribe all but exterminated when DAESH took over their region. For at least 16 of the Iraqi graves, many in territory too dangerous to excavate, officials are unable to estimate the number of dead.

The location of other burial sites were found based on memories of traumatised survivors, DAESH propaganda and what was gleaned from satellite mapping tools. Still, even the known victims buried are staggering — from 5,200 to more than 15,000.

DAESH has made no attempt to hide its atrocities — in fact, the group has boasted of them. But proving what UN officials and others have described as an ongoing genocide — and prosecuting those behind it — will be complicated as the condition of the graves deteriorates.

Satellite imaging offers the clearest look at massacres — such as one at Badoush Prison in the Iraqi city of Mosul in June 2014 that left 600 male inmates dead. A patch of scraped earth and tire tracks show the likely killing site, according to exclusive photos obtained by the imagery intelligence firm AllSource Analysis.

This combination of two satellite images (as seen above) provided by Allsource Analysis shows a suspected mass grave site next to a ravine at Badoush Prison in Mosul, Iraq, on November 13, 2015, left, and the site on July 17, 2014, right.

Of the 72 mass graves documented by AP, the smallest contains three bodies. The largest is believed to hold thousands, but this has proven difficult to verify.

Nearly every area freed from DAESH control has unmasked new mass graves, such as one found by a sports stadium in the Iraqi city of Ramadi. Many of the graves themselves are easy enough to find, most covered with just a thin coating of earth.

Some perpetrators have faced justice. In one case, around 1,700 Iraqi soldiers were forced to lie face-down in a ditch and then machine-gunned at Camp Speicher, which was an air installation near Tikrit in northern Iraq. On August 21, 36 men convicted in those killings were hanged at Iraq's Nasiriyah prison.

But justice is likely to be elusive in areas still firmly under DAESH control, even though some of the militants have filmed themselves committing atrocities. That's the case for a deep natural sinkhole outside Mosul that is now a pit of corpses.

In Syria's Raqqa province, thousands of bodies were apparently thrown into the giant al-Houta crevice.

Conditions in much of Syria remain a mystery. Activists believe there are hundreds of mass graves in DAESH-controlled areas that can only be explored when fighting stops. By that time, they fear any effort to document the massacres, exhume and identify the remains will become infinitely more complicated.

Working behind DAESH lines, residents have informally documented some mass graves, even partially digging some up. Some of the worst have been found in Syria's eastern province of Deir ez-Zor.

There, 400 members of the Shueitat tribe were found in one grave, just some of the tribe, which has up to 1,000 members, believed to have been massacred by DAESH when the group took over the area, said Ziad Awad, the editor of an online publication on Deir ez-Zor called The Eye of the City who is trying to document the graves.

So far, at least 17 mass graves are known, though largely unreachable, in a list put together from AP interviews with activists from Syrian provinces still under DAESH rule as well as fighters and residents in former DAESH strongholds.

"This is a drop in an ocean of mass graves expected to be discovered in the future in Syria," said Awad. 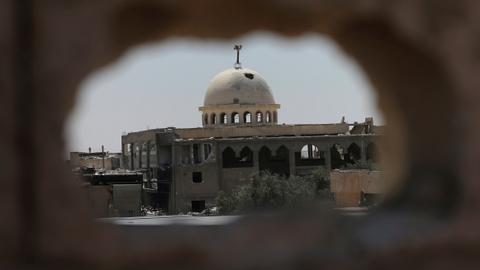