The latest attacks come as Iraqi security forces gain a foothold in western Mosul as part of a wide-ranging operation to drive out Daesh from their last bastion of power in the country.

At least nine security officials were killed and three others injured on Saturday by Daesh car bomb attacks in western Mosul, police said.

Iraqi security official Safa al-Behadli said that Daesh detonated four bomb-laden vehicles at a location where the police forces were stationed in Mosul's west side.

He said two military vehicles were also destroyed in the attacks.

In October, the Iraqi army backed by US-led coalition air strikes and local allies on the ground began a wide-ranging operation to retake Mosul, last bastion of Daesh in northern Iraq.

The Iraqi forces made significant gains over the recent months and now the militants are besieged in the northwestern corner of Mosul which includes the historic Old City centre.

The place houses the Grand al-Nuri Mosque, from where Daesh leader Abu Bakr al-Baghdadi proclaimed a caliphate across parts of Iraq and Syria in June 2014.

The war is taking a heavy toll on civilians trapped behind Daesh lines and used by the militants as shields.

Local officials and eyewitnesses have said as many as 240 people may have died in March in the Al-Jadida district of western Mosul when a blast resulted in a building collapsing.

The Iraqi army said on April 30 that it aimed to finish the battle for Mosul, the largest city to have fallen under Daesh control in both Iraq and Syria, this month.

Daesh's defeat in Mosul will not mean the end of the hardline Sunni group which remains in control of parts of Syria and vast swathes of Iraqi territory near the Syrian border. 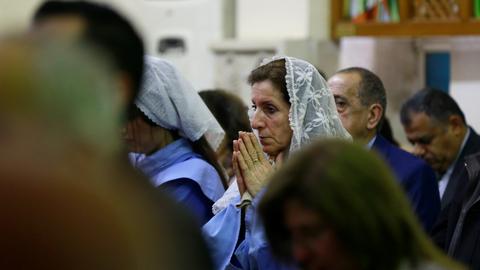