DAESH has a base in the Libyan city of Sirte and has launched frequent attacks against oil facilities and ports, including major export terminals that are closed but controlled by Jathran's PFG brigades.

The PFG is one semi-official armed group that is backing a new unity government in Libya, where two rival administrations and their loose alliances of former rebels have been battling for control after the 2011 fall of Muammar Gaddafi.

Fighting between PFG and DAESH broke out 52 kilometres south of the Brega oil terminal early on Saturday, PFG spokesman Ali al-Hassi and a medical source said.

Hassi said those wounded included Jathran, though he did not give details of how Jathran was injured.

He said the clashes had begun early on Saturday when guards spotted a convoy of about 100 vehicles, which they engaged in fighting for several hours. A number of DAESH terrorists had been killed and six vehicles seized.

The convoy had come from the eastern city of Derna, Hassi said. DAESH terrorists retreated from long-held positions around Derna this week.

Eastern military forces have entered al Fatayeh, an area south of Derna from which DAESH withdrew, but troops and civilians have suffered heavy casualties from mines and booby traps. More than 30 people have been killed and 11 wounded in such incidents over the past four days, military spokesman Abulkarim Sabra said on Saturday.

The new UN-backed unity government is trying to establish its authority over Libya, where two rival governments in Tripoli and Tobruk, as well as various armed factions, have been vying for power and a share of the country's oil wealth for two years.

DAESH's rise in Libya worries Western governments who are offering military and financial aid to the new unity government. But the new administration is still establishing itself in Tripoli and faces resistance from hardliners who reject its authority. 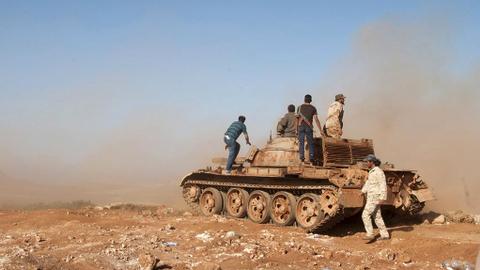