Since the start of Operation Euphrates Shield last week more than 400 square kilometers in Syria have been cleared of DAESH and the YPG.

Anadolu Agency reported on Friday that the FSA has taken control of an area of over 400 square kilometres, 24 kilometers deep from the Turkish border.

Operation Euphrates Shield was launched on August 24 by the TAF and the US-led international coalition with the aim of ridding Turkey's borders of terrorist groups, helping to enhance border security and supporting the territorial integrity of Syria.

Turkish President Recep Tayyip Erdoğan reiterated the importance of the operation for Turkey's security on Friday during a press conference he held ahead of his official trip to China to attend the G20 Summit.

"Nobody can expect us to allow a terror corridor on our southern border," Erdoğan said, referring to DAESH, the YPG and the PKK.

"I will never allow a terror corridor in our south and in Syria's north, I want everyone to know this," he added.

Rocket attacks on the Turkish province of Kilis from DAESH-held territory in northern Syria have killed tens of people since last January.

"We cannot pretend not to have heard continuous rocket attacks into our cities from Jarabulus, north Syria," Erdoğan said.

His remarks came after Turkish air strikes hit three DAESH positions around the Syrian settlements of Arab Ezza and al-Ghundura, west of Jarabulus, roughly in the centre of the 90-km stretch of territory that Turkey says it aims to clear.

Erdoğan's comments were echoed by Numan Kurtulmus, the deputy prime minister, who spoke to Reuters while on a visit to Chicago. He urged the United States to work with its NATO ally Turkey on "all different terrorist threats," a reference to their differences in Syria policy.

"We would like to see the pressure of the US on the PYD to go to the east of the Euphrates," he said. "So it would be very useful if we would apply this operation with the US forces together."

Meanwhile, YPG terrorists in the Syrian city of Manbij were reported as raising US flags in order to deter attacks. 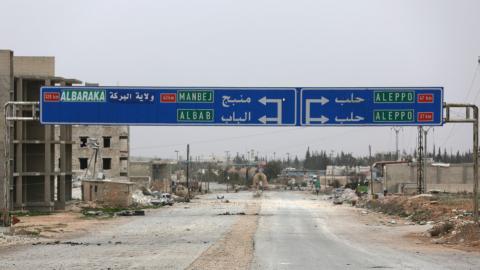