Egypt's interior ministry said Mohamed Kamal and another member of the group died in a shoot-out as the police tried to arrest the men.

A senior leader of the Muslim Brotherhood and another member of the group were killed in a "shoot-out" in Cairo, Egypt's Interior Ministry said on Tuesday. The police raided an apartment in Cairo's Bassateen neighbourhood after it learnt the premises were used by the group's leaders as a headquarters.

Although the Muslim Brotherhood has maintained it is a peaceful organisation, the ministry said Mohamed Kamal, 61, had been in charge of the group's "armed wing". He was considered one of the most prominent leaders of the Brotherhood and was a member of the Steering or Guidance Bureau, an executive body. Kamal had been sentenced to life in prison on two counts in absentia.

The Brotherhood said on its social media accounts that Kamal disappeared on Monday afternoon but shared no further details. Kamal was at one point in charge of the supreme administrative body known as the youth committee. He resigned from the position in May 2016.

The other Brotherhood member who was killed was Yasser Shehata. Shehata was sentenced in absentia to 10 years in prison for "assaulting a citizen and forcibly detaining the person in the headquarters of the Freedom and Justice party, "which is the political wing of the Muslim Brotherhood," the ministry said in its statement.

Founded in Egypt in 1928, the Muslim Brotherhood is a popular and powerful conservative socio-political group with millions of members throughout the Middle East.

The Brotherhood began as a social organisation, with deep religious undertones. Before becoming political, the group created charitable endowments, fostered social work, and by-and-large was considered just another non-profit. Seeing an opportunity to influence policy change in the region, the group branched into politics.

Following a coup and ousting of the first Egyptian president in the 1950's, the Egyptian Government launched a massive crackdown on the group, claiming they had attempted to assassinate the country's newly unelected leader.

Up until 2011, the Brotherhood was illegal as the law banned all parties based on religion. But in December that year, its political wing – the Freedom and Justice Party – dominated parliamentary elections, winning about half of the seats up for grabs.

The group initially said it would not put forward a candidate for president, but Mohamed Morsy ran and in June 2012, became Egypt's first democratically-elected president.

Egyptian President Abdel Fattah al-Sisi cracked down on the Muslim Brotherhood after he toppled President Mohamed Morsi in 2013. 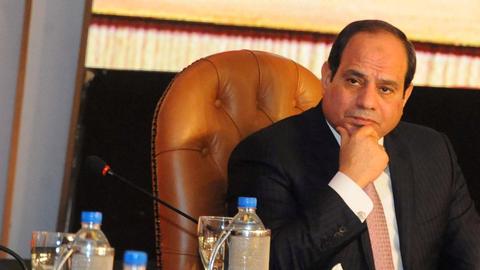